The stern and unprecedented rebuke of the current administration by a former president stirred Trump to reply with an all-caps tweetstorm.

President Donald Trump was closely watching the address of former President Barack Obama at the Democratic National Convention on Wednesday night, attacking his predecessor on Twitter in real-time.

During his speech to America, Obama noted that he had hoped that Trump would “grow into the job” when he succeeded him in 2017. “Donald Trump hasn’t grown into the job because he can’t,” he said.

The stern and unprecedented rebuke of the current administration by a former president stirred Trump to reply with an all-caps tweetstorm.

“HE SPIED ON MY CAMPAIGN, AND GOT CAUGHT!” Trump wrote. The false accusation that the Obama administration was spying on Trump’s 2016 campaign has been repeated for years.

The Obama administration was investigating Russian interference in the election, a fact that has been proven and repeatedly confirmed by the U.S. intelligence community.

Trump has coined the investigation “Obamagate,” which he calls “the greatest crime in American political history.”

“WHY DID HE REFUSE TO ENDORSE SLOW JOE UNTIL IT WAS ALL OVER, AND EVEN THEN WAS VERY LATE? WHY DID HE TRY TO GET HIM NOT TO RUN?” Trump asked, questioning why Obama refrained from backing Joe Biden earlier in the election cycle.

Early in the campaign, Biden told reporters, “I asked President Obama not to endorse. Whoever wins this nomination should win the nomination on their own merits.”

Trump then posted a video of himself speaking earlier in the day when he said that if the previous administration “did a good job” he wouldn’t have run for president. “I would’ve been very happy, I enjoyed my previous life very much,” Trump said. “But they did such a bad job that I stand before you as president.”

Four studies found that Trump won the 2016 election due to racial anxiety and fears of “cultural displacement” by white voters.

Trump also remarked on the Democratic nomination acceptance speech of Kamala Harris who called Trump out by time. At one point, the former prosecutor alluded to the president saying, “I know a predator when I see one.” 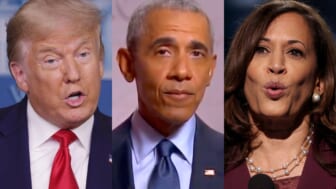 Read More: Kamala Harris says ‘there is no vaccine for racism’ in rousing DNC speech

The president again tweeted in all-caps, “BUT DIDN’T SHE CALL HIM A RACIST??? DIDN’T SHE SAY HE WAS INCOMPETENT???,” referring to Biden and Harris’ interaction during the Democratic primaries.

But Harris specifically noted when she interrogated Biden about bussing that she did not view the former vice president as racist. She also never called Biden incompetent.

Joe Biden will officially accept the Democratic nomination for the presidency tonight.