'There has been no respect for anybody’s civil rights,' one protester says 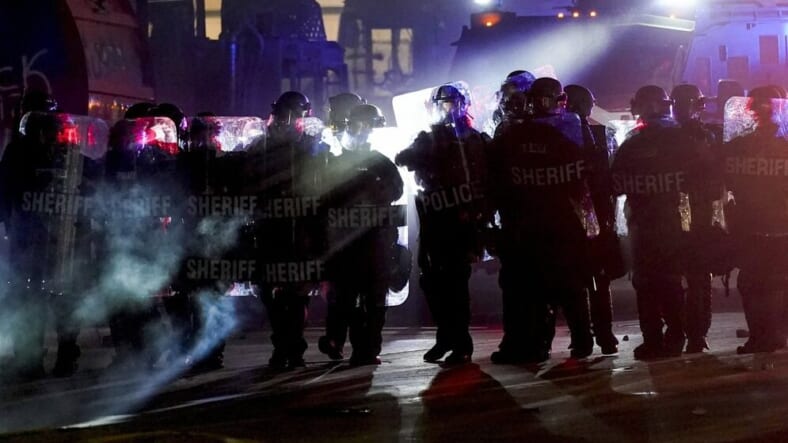 KENOSHA, Wis. (AP) — Police officers in Kenosha were on alert after days of protests over the shooting of Jacob Blake by one of their colleagues, and they’d recently gotten a tip about “suspicious vehicles” from out of state.

So, after watching a group of people fill cans at a gas station Wednesday and then hop into a minivan with Oregon plates, the officers sped in. A bystander’s video shows officers leaping out of black SUVs with guns drawn. About 25 seconds later, an officer shatters the van’s passenger-side window with her baton, unlocks its door and pulls a person out.

The group turned out to be members of Riot Kitchen, a Seattle-based organization that serves food at demonstrations. Jennifer Scheurle, a member of its board of directors, said they were filling up gas cans to power a generator for their food truck.

The nine taken into custody in the SWAT-style operation Wednesday were among dozens of people arrested this week in the Wisconsin city. The arrests have highlighted activists’ complaints that police have been responding to protests over the white officer’s shooting that left Blake, a Black man, paralyzed, even as they’ve tolerated armed militia groups.

The Riot Kitchen members were charged with misdemeanor disorderly conduct, but all were free by Friday morning.

“We reject all claims that our crew was there to incite violence or build explosives,” said Scheurle, who was not among those in Kenosha. “Our nonprofit organization has always been and will always be about feeding people.”

Kenosha Police Chief Daniel Miskinis said at a Friday news conference that “just under 50” people had been arrested during the protests. The department later provided a list of 58 charges, more than half of them for curfew violations, but declined to specify the number of people arrested or provide names.

“I believe everybody out there in law enforcement has been friendly to both sides,” Miskinis said.

An analysis of jail records since the day of Blake’s shooting shows about 45% the people facing charges seemingly related to the protests live outside Wisconsin.

Those arrested were almost 70% white and about two-thirds male. The vast majority were charged with misdemeanors or civil violations, although there were also some felonies. Miskinis said one person had been charged for having a “flamethrower.”

More than 20 of the people remained in jail Friday afternoon.

Adelana Akindes, a 24-year-old from Kenosha, said she spent nearly a day in a crowded cell after being arrested Wednesday while walking toward the demonstrations carrying a shield.

Police had Akindes and three others lie on the ground as they put them in handcuffs, she said, adding that officers did not read their Miranda rights or say why they were being arrested. She was released on Thursday evening and charged with breaking curfew.

The last three nights of protests have been mostly peaceful, and police have not fired tear gas or pepper balls. But they’ve used tactics that local activists see as heavy handed.

On Thursday night, police pulled over several cars of people headed to protests. They arrested a group of people in one vehicle and searched the car of another group.

“There has been no respect for anybody’s civil rights,” said Isaac Wallner, a 30-year-old Kenosha activist. “It’s been a police free for all. They do whatever they want.”

Wallner, who is Black, contrasted this with what he characterized as a tolerant, or even friendly, attitude police have taken toward the white men who’ve come to the city outfitted with heavy vests and long guns, including a 17-year-old charged with fatally shooting two people and wounding a third.

Earlier in the week, sheriff’s deputies shot pepper balls at protesters and arrested them when they failed to quickly leave after being told they were breaking curfew. But officers in an armored vehicle with “Sheriff” on the side were also recorded at night tossing water bottles to men carrying rifles.

“We appreciate you guys. We really do,” someone can be heard calling from the vehicle in a video of the exchange.

Kenosha County Sheriff David Beth said Friday that the officer seen giving out water was not one of his deputies, and the person who said he appreciated what the armed civilians were doing “doesn’t mirror all of law enforcement’s perspective on what happened.”