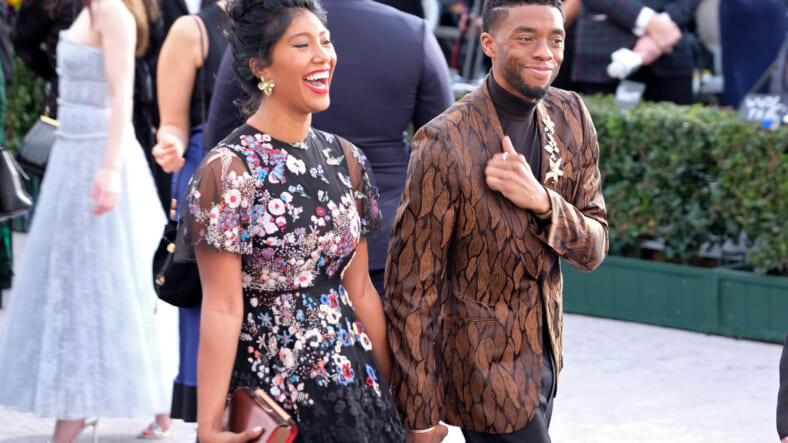 The world is still reeling at the news of Chadwick Boseman’s death following a lengthy battle with colon cancer. In their statement after his death, Chadwick Boseman’s family confirmed that he was married to his longtime love Taylor Simone Ledward.

“He died in his home with his wife and family by his side,” the family wrote in a post on the late actor’s social media pages, confirming that Boseman and Ledward had tied the knot at some point before his death.

Ledward, a graduate of Cal Polytechnic University Pomona, majored in music industry studies and served as the lead singer of the school’s jazz band.

In 2015, Boseman and Ledward were spotted together at the Los Angeles International Airport, sparking romance rumors which neither admitted or denied. Although the couple continued to keep their relationship private, when Ledward began accompanying Boseman on the red carpet at award shows and premiers, speculation about their romance escalated.

As reported by Eonline, the couple posed together at the 2019 Screen Actors Guild Awards, where Boseman took home a trophy for his performance in “Black Panther.” They also shared the red carpet at the New York screening of Boseman’s 2019 film “21 Bridges.”

Boseman publicly acknowledged the couple’s relationship when he gave Ledward a shout-out during his acceptance speech at the 50th NAACP Image Awards. “Simone, you’re with me every day. I have to acknowledge you right now. Love you.” Sitting in the audience, Ledward mouthed back the words, “I love you.”

While the exact timing of their marriage ceremony is unclear, rumors that Boseman and Ledward were engaged began circulating in October 2019. Although the couple never confirmed their engagement, Ledward was spotted with a ring on her finger.

The pair was last photographed together at an NBA All-Star Game in February 2020.

In their statement announcing Boseman’s death, the family wrote: “The family thanks you for your love and prayers and asks that you continue to respect their privacy during this difficult time.”