With 37 days left until the Nov. 3 election, theGrio held an online panel discussion with some of the biggest and brightest Black minds in America talk about just how important this election is.

Comedian and actor Jamie Foxx and singer/songwriter/activist John Legend also briefly joined the conversation to discuss the nuances of voter suppression and the potential perils the nation faces if President Donald Trump gets another term.

Read More: President Trump could find ways to get around a Biden win in the election 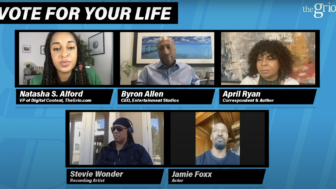 During the 90-minute plus live stream, the collective expressed to Black American viewers that registering to vote and exercising said vote not only makes a difference for the forthcoming election but has always made the difference in elections throughout history.

“We are the most powerful vote in America,” said Allen. “Usually the White vote is split 50/50. And the reason they work so hard to eliminate our vote, to suppress our vote is because they know we are the tie-breaker.”

The act of voter suppression was a key topic during the panel. Ryan, a longtime White House correspondent, spoke about how the Trump administration was attempting to silence the Black vote by having the United States Postal Service remove mailboxes to control mail-in voting, and that Black citizens must stay diligent in their intentions to use their vote.

“We have to now use critical thinking in the midst of this very painful moment where we might have to wear a hazmat suit to the polls,” Ryan stated. “I can’t express how serious this is.”

While Ryan stated that it doesn’t matter who you vote for as long as you vote, Wonder was pretty clear that he was endorsing Democrats Joe Biden and Kamala Harris for the White House and that Trump’s performance should make that decision easy for others.

“If these past four years haven’t shown you how you should vote, then you have some issue in your head,” said the 25-time Grammy-winner. Wonder has never been shy about using his music to criticize the President, evident in his 1974 number one single, “You Haven’t Done Nothin’,” which referenced then-President Richard Nixon. Wonder condemned Trump’s racially fueled fear-mongering.

“If you think that spreading fear to people, saying ‘hey, they’re gonna come and get in your neighborhood,’ come on. They’re just trying to create something that’s not true. Don’t let fear put your dreams to sleep.”

When Foxx joined the conversation, the Academy Award winner also spoke about how low Trump set the bar for American presidents.

“The presidency used to be a benchmark of the moral compass. No matter what, we could like to the presidency and say, ‘All of our kids and look at this person, whether male or female, and say this is what we strive to be,'” Foxx said.

“Is this what we strive to be now; a person who is openly bigoted in the way that he speaks? A person who says people in [Charlottesville] were good people? Those people who said ‘Blood and Soil,’ and we don’t even know the education that ‘Blood and Soil’ was said with the Nazis when they were doing what they did to the Jews? What have we become?”

Alford reminded the panel that only 60 percent of potential Black voters showed up to the polls in 2016. Each speaker expounded on how much that led to Trump’s victory.

Foxx agreed that Black Americans needed to take responsibility for Trump’s place in the White House. “What I do get discouraged about is us. Trump didn’t vote for himself. Those votes that he got were from people,’ he explained. “And the fact that we sat back and we allowed it, what does it say about us?”

Ryan believes that the public puts personality over platforms in their voting decision making.

John Legend joined in the panel to implore just how dire this election will be to the nation. “Democracy is at stake. Democracy hasn’t always been accessible to Black people in America,” Legend said.

The EGOT winner further explained that the traditional format of the U.S. government may be in long-term jeopardy if there are four more years of Trump.

“America’s Democracy is not guaranteed. Our late civil rights leader and founding father John Lewis said that ‘Democracy is not a state; it’s an act.’ We are not just a Democracy because we say we are. We have to act accordingly. That means us voting, that us maintaining the rule of law so that every vote counts equally and that there aren’t all these road blocks and suppression techniques being used by the government.”

The panel expressed that unity among the people and the parties would determine the outcome of the election. Foxx quipped that Republicans will vote for Trump no matter what just to toe the party line.

“Republicans are different. Whoever’s up, they’ll endorse,” Foxx explained. “Democrats are like R&B singers; everybody wants to sing lead. Republicans are like a choir; they all sing, they don’t sing in tune, but they’re loud and they all know the words.”

Wonder piggybacked Foxx’s assessment on the two parties, suggesting that there needs to be a synergy of ideals to see progress. “Some people say that Democrats fall in love, while Republicans fall in line,” Wonder said. “It’s time for everyone who is for the good of our family, our people, our united people to fall in line with love, and make it happen.”

The overall tone of the panel was to make sure viewers not only voted but know what their options are to avoid voter suppression. Allen suggested people register and vote early, as some states allow you to vote prior to Election Day.

“They want you to stand in line somewhere for eight hours and when you get to the table, tell you you’re in the wrong place,” Allen said. “You can avoid that if you register early, know where you’re supposed to vote and a lot of times, the polls are open a day, three, four, five days before. You don’t have to wait until Tuesday, November 3.”