OPINION: The juror disrupted a system that consistently upholds rules that were not created to protect all who now constitute 'we the people.'

Wendy Smooth
Breonna Taylor, left, was gunned down in her own apartment in March. Kentucky Attorney General Daniel Cameron is facing criticism is how he handled the prosecution in her case. (Photo: Family of Breonna Taylor/Getty Images)

During the vice-presidential debate, the moderator asked the candidates whether Breonna Taylor’s family received justice, a question reflecting the case’s continued unsettledness. Earlier that day, a grand juror in the Kentucky case awaited a judge’s ruling that would allow them to speak publicly revealing just what happened in that jury room without threat of prosecution, which defies the cloak of secrecy associated with grand juries.

The juror’s defiance is a stellar example of seeking justice no matter your position or what job you are assigned to do — just do it well whether you are in the streets, the jury room, or the voting booth.

Days prior, the same anonymous grand juror took the unprecedented step of filing a motion to release the grand jury recordings, which would grant the Taylor family and the public access to the 15 hours of grand jury proceedings. In turn, Attorney General Daniel Cameron unleashed a barrage of counter motions and appeared across media outlets intent on discrediting and suppressing the grand juror’s voice.

The AG’s actions suggest the juror’s truth is a potent rebuttal to his claims that jurors acted on their own in deciding not to charge the officers with Breonna Taylor’s murder.

This juror’s actions are nothing short of heroic. For those of us who are baffled and incensed by the continuous failures to bring charges nor prosecute police who shoot unarmed Black people at alarming rates, the juror’s actions are simply what had to be done.

The grand juror refused to be average or middling in their service to the community. They took the job seriously stating, “The citizens of this Commonwealth have demonstrated their lack of faith in the process and proceedings in this matter and the justice system itself. Using the grand jurors as a shield to deflect accountability and responsibility for these decisions only sows more seeds of doubt in the process while leaving a cold chill down the spines of future grand jurors.”

The juror disrupted a system that consistently upholds rules that were not created to protect all who now constitute “we the people.” This is testament to what happens when we use our power, however we find it to protect the promise of justice for all.

Though most of us will move heaven and earth to avoid jury duty, it is one of the most honorable tasks one can perform in service to our democracy. It is civic engagement at its finest, and citizens performing their civic duty must not be compromised, exploited or required to act in service to an unjust system.

The Kentucky grand juror understood this, acting with an unwavering commitment to equal justice and fairness. They attempted to repair the persistent gap between the justice citizens seek and the injustice they receive.

Their actions align squarely in the protest politics tradition, demonstrating there are many roles to play and spaces to act seeking justice. Direct action protests or marching in the streets often operates as the singular definition of standing up for justice and speaking back to power. While thousands took to the streets for Breonna Taylor, marching is afforded to those who can physically do so, and the pandemic left the most vulnerable on the sidelines. However, from their seat on the grand jury, an ordinary community member too sought justice.

No matter where we find ourselves, we can and must put in the work for justice.

Like the grand juror, we all have jobs to do in the fight for justice. I deeply grieve Breonna Taylor’s killing; a Black woman gunned down in her own home as she slept beside the Black man she loved. Her unprosecuted killing robs Black women of the sleep in peace when day is done Nina Simone sang about and we deserve. The lack of government protection afforded Blacks in this country constantly calls into question our citizenship and humanity.

In response to my grief, I’ve decided to speak truth to power by voting. Attorney generals are elected as are local judges, mayors, city councilmembers and governors — who all play a role in upholding justice in our local communities.

Not only do I intend to vote, like Black women voters since 2008, I intend to “show up” and “show out” bringing friends, civic organizations, church members, sorority sisters, fraternity brothers, neighbors and friends to the polls.

For those who are not legally eligible to vote, the job is still to turnout voters. The grand juror’s quest for justice energizes me to make a voting plan, execute it, and tell all who I meet why I vote. The fight for equal protection and a justice system that works equally for all can and must happen on multiple fronts — the jury room, the streets, and the voting booth. 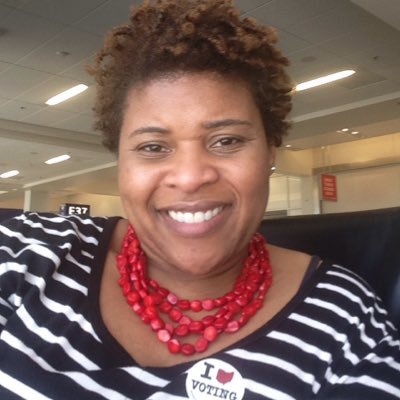 Wendy Smooth, Ph.D. is an Associate Professor of Women’s Gender and Sexuality Studies, Political Science and is appointed to the John Glenn School of Public Policy at the Ohio State University. She researches and teaches on intersectionality in American electoral politics.