'Why didn't they use a Taser?' asked Walter Wallace Jr.'s father. 'Why you have to gun him down?'

A fatal police shooting has sparked protests in Philadelphia, where officers claim Walter Wallace, Jr. approached them armed with a knife Monday afternoon.

The incident occurred shortly before 4 p.m. when two Philadelphia Police officers responded to a call in West Philadelphia about a man with a weapon. They arrived at the scene and ordered Wallace to drop the knife but say he “advanced towards” them.

The responding officers then fired “several times,” wounding Wallace, who was driven to a nearby hospital by one of the policemen and then died.

Protesters took to the city streets Monday night to denounce the shooting, resulting in smashed windows at businesses and at least one police vehicle being set on fire. Over 25 officers have been reportedly injured by bricks and other thrown objects. A 50-year-old female officer was hospitalized after being struck by a speeding truck. 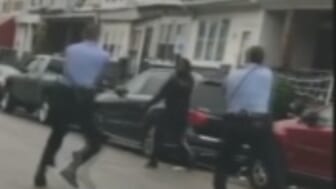 Very clear bystander video of the shooting is circulating on social media. The two officers are seen pointing guns at Wallace and shouting, “Put the knife down, put the knife down!”

Officers then fire on the man, who falls to the ground; a woman later determined to be his mother is heard screaming and then running to the 27-year-old Wallace, who is lying in the street.

The situation began with a domestic call, and while police have released no further details, such as how many shots were fired, multiple evidence markers are seen in local video news reports, noting shell casings.

Philadelphia Mayor Jim Kenney said Wallace’s shooting raises “difficult questions that must be answered.” One of them — being posed by family members and demonstrators — is why Philly officers couldn’t use less deadly force.

The slain man’s father, Walter Wallace, Sr., told The Philadelphia Inquirer it appears his son was struck up 10 times.

“Why didn’t they use a Taser?” the senior Wallace asked outside a family residence on the block. “His mother was trying to defuse the situation.”

He told the newspaper his son was taking medication.

“He has mental issues,” Wallace Sr. said. “Why you have to gun him down?”