If Trump were to be reelected, that’s on white people

OPINION: Many white Americans don’t want to be saved because their definition of salvation is mired in racism. 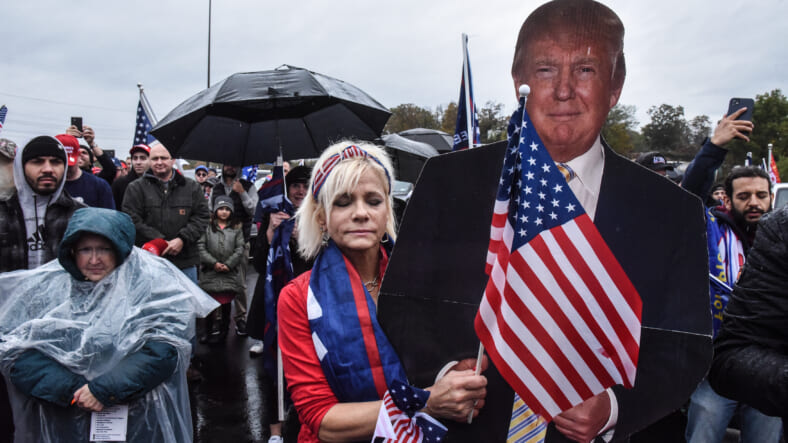 White America, listen up. If Trump wins this thing, that’s on you.

Already, Trump is claiming election fraud and declaring victory as he vows to challenge official state results, seeks recounts, and uses the post office to hide the ballots. Of course, this election is far from over, and in various key battleground states, the early mail-in votes have not been counted.

It could take days to settle this contest, and we knew this was a possibility. And for all we know, Black voters in Atlanta, Detroit, Houston, Milwaukee, Philly, and elsewhere, still may heroically save America from itself, from white supremacy and fascism.

Read More: Don’t worry, mail-in ballots and Black voters might just save us from Trump

In other words, Black folks are doing their best work to save themselves from the plantation police state and 21st Century Jim Crow apartheid, and even help liberate the rest of the country in the process.

However, we cannot do it alone. One thing that stands out is how close this election looks and feels, and we need to unpack this with the quickness. Why did so many millions of white people still vote for Trump as enthusiastically as they did in 2016, despite the abject misery he is creating for them?

Some people, a sizable portion of the population, prefer a white nationalist dictator who has proven himself a crime boss with America as his crime scene.

Also Read:
If Trump were to be reelected, that’s on white people

Many would say Trump is the worst president this nation has ever seen. That says a lot, given there is much competition for that top spot, including presidents who owned slaves and committed genocide against indigenous people. Let us assume for a moment this is true, that at the least, Trump is the worst American president in modern history.

Certainly, the damage he has inflicted on this country is massive, with millions infected in a public health pandemic, and a quarter-million dead, and counting, with no end in sight as the cold weather begins to knock on our door.

This orange man told you to drink Clorox bleach, and allowed COVID-19 to spread on purpose, by downplaying the virus, taking no action to address the crisis despite knowing the dangers early on, and holding super-spreader campaign events.

Trump has kidnaped babies at the border and forcibly sterilized Black and brown women in ICE detention. He has openly supported and emboldened white supremacist terrorists, and used federal troops as his personal police force to sic on Black Lives Matter protesters.

And arguments that white folks supported Trump because of economic anxiety rather than racism were long debunked, certainly now amid the worst economy since the Great Depression.

America never came to terms with the racism undergirding the Trump 2016 victory — the border wall, the Muslim ban, and the effort to eliminate Obamacare, along with the targeting of Black voters by the Trump campaign and Russia in an effort to deter them from voting. White supremacy was how he came to power, and how he will stay in power.

Ask Black people who know, and they are not surprised. “Turns out, this really is the country we thought it was,” tweeted Nikole Hannah Jones of the 1619 Project and New York Times Magazine.

“I actually don’t agree that another candidate from the primary would’ve done better,” tweeted Bree Newsome Bass, adding, “I think people continue to be in denial about how racist this country is & how committed the majority of white people are to preserving racial caste despite claims of believing the opposite.”

An NBC exit poll bears out the scope of the problem. While 34% of people said the economy was their most important issue, followed by racial inequality (21%), the coronavirus (18%), crime and safety and health care (11% each), Trump supporters were more likely to pick the economy and crime and safety, while Biden voters pointed to racial inequality and the coronavirus as their top issues.

Additionally, the poll, which is preliminary, 9 out of 10 Black women and roughly 80 percent of Black men voted for Biden. Contrastingly, the white vote was split with Trump garnering more than 50% of white women and white men.

This is how America operates. White America — aided by some misguided Black and white Hispanic voters who crave proximity to whiteness — cannot wean themselves off racism. After the suffering that the country has endured over the past four years, one would expect a Biden landslide under normal circumstances, not because Biden is a savior, but because people are hurting under Trump, including white people, and this election is a sure way to stop the bleeding.

Harriett Tubman could have led more people out of bondage, but some people didn’t want to be saved. Many white Americans don’t want to be saved the way Black people do, because their definition of salvation is mired in racism. With his promise to return to the good old days when the white man was king, Trump is their savior from a future of multiculturalism, diversity and inclusion.

White supremacy also means death, not just for people of color, but for white Americans who will take one for the team, and will fight — and die — to preserve a nation where Black people are never allowed to seize the reins of power.

Like the poor white Confederate soldiers who fought to the death in the Civil War to preserve slavery, a system that rendered white labor obsolete, the Trump voters will support him, with nothing to show for it except white hate, white Jesus and guns.

Trump supporters may catch the virus at a Trump rally and suffer from hypothermia after being stranded in the cold, then get their healthcare snatched from them. But at least they aren’t Black, they say to themselves.

A Trump defeat is possible, but don’t blame Black folks if he wins. White America, this is all on you, and don’t say we didn’t warn you.