Vice President-Elect Kamala Harris is now a heartbeat away from the presidency -- but her election means so much more than that. 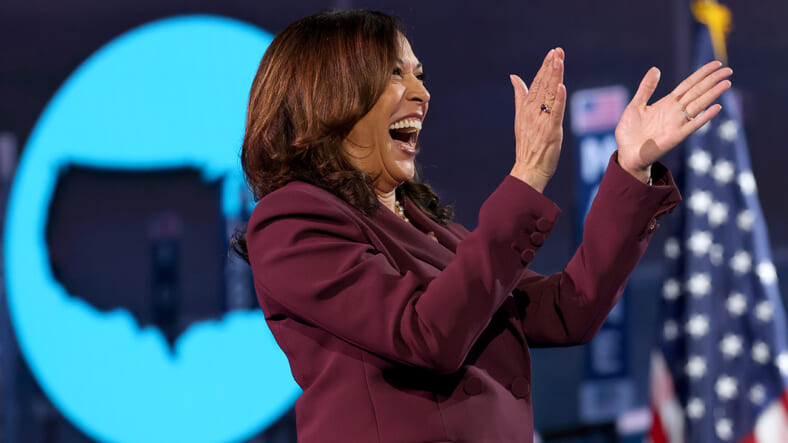 Kamala Harris (I mean, ok, fine, the Biden-Harris campaign) did it!

Propelled by record voter turnout and some combination of determination to end Trump’s reign of terror — and excitement over a historic ticket that would give us the first woman, Black person, Black woman and HBCU grad to serve as vice president — the Biden-Harris team is headed to the White House.

We’ve got a Black woman — a Black woman from Oakland, who graduated from Howard University, where she pledged an Alpha Kappa Alpha Sorority Inc. — on her way to the White House, y’all. (For you “well, actually” head folks: Yes, I know the vice president lives on the grounds of the U.S. Naval Observatory, but her office is on White House grounds.)

Also Read:
A Black woman is going to the White House and we’re about to act a fool

And another Black woman and Spelman College alumna, Stacey Abrams, is a huge part of the reason. After losing her race for governor of Georgia in 2018 by 55,000 votes, Abrams mounted an effort to get 800,000 new voters registered in her state and turned it blue for her fellow HBCU grad. Come through, Black girl magic. That is the epitome of undaunted, “a choice to change the world” personified.

Y’all, Howard alumni are about to be insufferable, but in real life, all HBCU alumni are about to act a whole fool. Fried Chicken Wednesdays — or maybe it’ll be soul food Thursdays because you know Howard is the outlier — are about to go national. We’re going to have jerk chicken and rice and peas and cabbage as our national meal, and the Jerk Corner is going to beat gentrification in D.C. with District Jerk making its way back after noise complaints tried to prosper against it.

There will be line dancing and Strafe’s “Set it off” will be played at every official appearance from here on out, and no reporter will ever mistake a Skee-Wee for “screeching” ever again. We might even get a national Homecoming holiday.

We finally have someone in the second highest seat in the land who knows the value of our schools, never questions their worthiness or relevance or how well they prepare their graduates for ‘The Real World.’ Someone who comes from an undergraduate foundation where we’re all family, people are not just a number, and Black lives matter.

My daughter asked me the other day if only the best and the brightest Black children get to go to HBCUs. What. A. Time.

When I was a little girl of maybe six or seven, I matter-of-factly told my grandmother I couldn’t be president, because I was Black and a woman, a double negative. And now we have one sitting in the seat adjacent to the president. The tie-breaker in Senate votes.

People often focus on the vice president as being a heartbeat away from the president, but over the last four decades — starting with Jimmy Carter and Walter Mondale — the vice president has been a key presidential advisor, with a prime seat at both the metaphorical and literal tables. Their priorities have helped shape national priorities and actions.

In her time in the U.S. Senate, Harris championed bills around tackling bias and anti-racism, Black maternal health, and environmental justice. And while she has been criticized for her prosecution record, we know, realistically, that the job of a prosecutor is to enforce laws already written; they don’t get a voice in what those laws actually say.

Black women have been saving U.S. politics, specifically the Democratic Party, for years with little more than empty promises to show for it. And while I know one woman can’t save the world, I couldn’t be more proud to be raising a Black daughter who was born the year we elected our first Black president and who, with her brother, is going to grow up in a world where it’s normal to see Black women and men who attended Black colleges and universities in the highest positions in the land.

I know one thing, though: I’m going to need American voters, and especially the Democratic Party, to put some respect on Black women’s names. Black women voters in Detroit, Atlanta, Philadelphia and Milwaukee got this done for this campaign.

Black women, who are consistently ignored in policy conversations and who are often overlooked and underappreciated. Black women are the most reliably Democratic voters — we are the least likely to grumble about needing a “perfect candidate,” because we know the importance of voting for the collective good.

And, truth be told, no candidate has ever really been “perfect” for us. I’m going to need the Biden team to recognize the efforts of the HBCU presidents, alumni, and students who went out for him, and I’m going to need to see a historic cabinet and list of federal appointees that reflects the work that won him this election.

We gon’ party and celebrate and dance and some of us will stroll and we’ll soak in the joy of this momentous occasion, but there’s still work to do. This election proved this country is exactly who and Black women have been saying it is, and if y’all are going to keep relying on Black women to save the rest of you from yourselves, the least you can do is say our names at the tables where it counts.