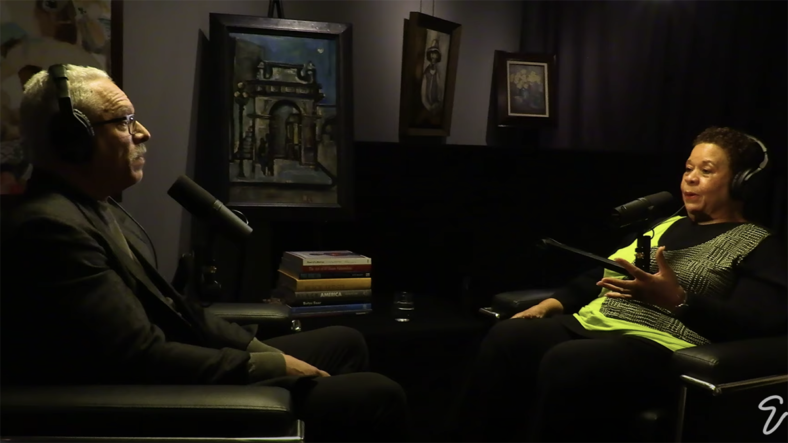 In the seventh episode of Eric’s Perspective Podcast, the president of the Museum of African American Art, Berlinda Fontenont-Jamerson shares how she moved from a successful career in Corporate America to become a leading figure in sharing the African American story through the power of art and economic development.

In episode seven of Eric’s Perspective, a podcast dedicated to exploring African American art, host Eric Hanks talks with Fontenont-Jamerson about her former career and her present position.

Born and raised in Los Angeles, Berlinda was born into a family of fourteen, with ten brothers and a sister. She graduated with a bachelor’s degree in industrial psychology and a master’s degree in business administration.

Bringing up the history of the Museum of African American Art, Fontenont-Jamerson mentions that the museum is the oldest African American museum in Los Angeles and was founded by Dr. Samella Lewis in 1976.

The museum was the collaborative work of Dr. Lewis, with some community leaders, art historians, and educators. Their intention was to set up a museum that will present the arts of and about people of African descent and their contributions to world culture.

When asked how she got connected with the museum, she narrates her long history with Corporate America, having served as head of community relations for Sempra Energy and other American corporations. During that period, she was asked to be on the board of the Museum of African American Art by the late Harvey Leeman who was then the board chairman.

After much persuasion, she came to terms with their vision and mission and accepted the invitation to join the board. A few years later, she ascended to being the president of the museum. She notes that her interest in the museum is tied to its closeness to the community and its accessibility and availability to the local community.

When asked about African American art, Fontenont-Jamerson noted that she was an art collector and buyer. Being a figurative person, she loves artworks of flowers and people because it’s something one can relate to, but she also appreciates abstracts.

The museum, she says, reaches out to established artists and provides a platform for emerging artists to display their works. She also notes that people get to know about the museum through the internet.

Going back to the history of the museum, Berlinda Fontenont-Jamerson recounts periods of difficulties they had faced. From the times they had to renegotiate with the building owners, especially when the corporation holding company changes hands, to another time where they had to restart the museum, owing to a rainstorm that flooded the storage area, causing loss of many artworks and pictures in the year 2014.

This made them shut down for about six months, as they had to start all over to work on the museum.