'I never imagined this would get such a huge response,' director Noelle Chestnut Whitmore shared.

With a few celebrities making headlines for their controversial hot takes on Clubhouse, the exclusive app has slowly created a buzz on social media.

But when a group of talented people used the format to put on a live production of The Lion King, thousands tuned in to listen. Now, some are predicting that the audio-only aspect of Clubhouse might make it the next major social media platform.

Showcasing a full cast and choir, The Lion King was organized by Noelle Chestnut Whitmore, who assumed the role of executive producer and director. The more than 40-member cast all auditioned last month, and together they performed, sang, and played instruments flawlessly on Saturday.

The viral event with its beautifully orchestrated PTR (pull to refresh) imagery that perfectly matched every scene in the show, was an instant hit with Clubhouse users.

Whitmore came up with the idea for the show while in a Clubhouse room with Bomani X, whose picture is the current icon for the app.

“What started as a random conversation on Clubhouse has scaled to something much greater,” Whitmore said in a press release. “We have so many talented people contributing their time and energy to the performance. Our goal is just to spread some joy to people through these events. I never imagined this would get such a huge response.”

And the response was huge, indeed. With over 5,000 listeners in attendance, the Clubhouse room for “The Lion King: The Musical” was so full that the app started denying entry to listeners. 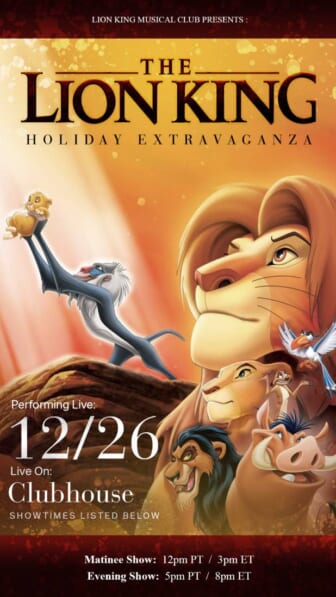 The live rendition of the beloved musical debuted on Dec. 26, with a matinee performance and an evening show. #LionKingCH was trending on Twitter all weekend with celebs and fans showing tons of love.

Nigerian-American author, Luvvie Ajayi, tweeted that the production was ‘amazing.’

Director Ava DuVernay chimed in, describing the musical as ‘beautiful.’ She also thanked the cast and crew for bringing joy and Black excellence to Clubhouse.