EXCLUSIVE: A former top cop from a previous presidential administration underscores the bevy of criminal cases facing Trump once he leaves office 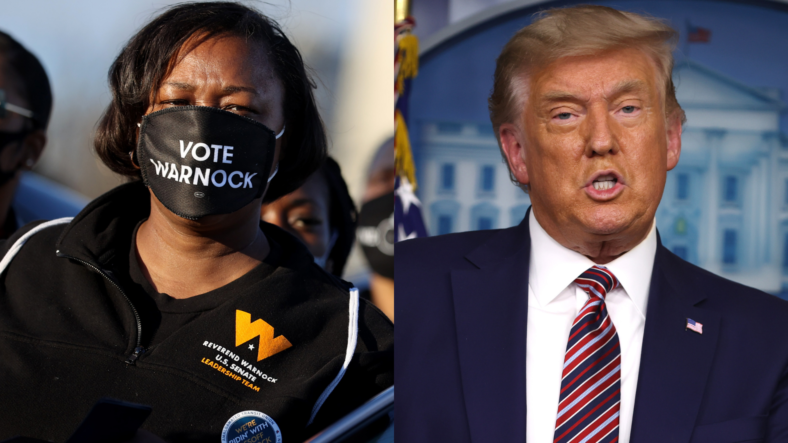 It is election day in Georgia with two U. S. Senate seats being voted on in a close race that could change the political structure in the U. S. Senate.

Vote turnout strategist Stacey Abrams is on Twitter encouraging Georgia voters to go to their local polling places. During the 9 a.m. eastern hour, Abrams reassured Georgians that, due to early voting, people were “in and out in five minutes” in the Atlanta area.

Abrams is in support of the Raphael Warnock and Jon Ossoff Democratic Senate ticket. On the other side of the political spectrum, incumbent Republican Senators Kelly Loeffler and David Perdue had in-person support from President Donald Trump last night in northern Georgia.

At an essentially mask-less outdoor campaign rally in Dalton, Georgia President Trump worked hard at making the case to overturn election results in eight states rather than stump for votes for Loeffler and Perdue.

Trump played to the court of public opinion after the latest controversy Saturday where he asked the Georgia Secretary of State Brad Raffensperger to “find 11,780 votes” to overturn the certified election in the Peach State, to which Raffensperger declined.

Also at the rally Trump rambled and falsely insisted he won the 2020 presidential election by a “landslide” and the Democrats “rigged” the election. He also called out Abrams and Fulton County — which is nearly 45% Black — with ire as they have been some of the biggest challenges to his failed presidential election bid.

Trump also said to the crowd, it is not just complaints about Georgia but “eight different states.”

The president’s alleged criminal hour-long phone call Saturday has Democrats up in arms calling what the president’s actions did an impeachable offense. But what will and can be done in the next 15 days of the presidency?

“The democracy may be in trouble,” Virginia Congressman Bobby Scott told theGrio in an exclusive interview. Scott formerly served on the House Judiciary Committee and was the former chair and ranking member of the House Crime Subcommittee.

Scott’s words come as people, primarily Democrats, are calling for an investigation and punishment into the president’s call attempting to overturn the certified presidential vote tally that proclaims Joe Biden the winner.

Congressman Scott questioned if the president’s request was “in violation of the criminal code.”

“As district attorney, I will enforce the law without fear or favor. Anyone who commits a felony violation of Georgia law in my jurisdiction will be held accountable,” Willis said in a statement obtained by local TV station WSBTV.

The larger question is whether there will be any punishment for the president after this latest infraction or break in the rule of law.

A former top cop from a previous presidential administration, who spoke to theGrio on condition of anonymity, was asked if there is anything the president will have to answer for with any punishments that will stick.

The former administration official underscored to theGrio that the president is individual 1 in the Cohen case in which the Manhattan district attorney had vowed to go after the president immediately following the transition of power on Jan. 20, 2021.

The former official also said if they have guts, the Mueller obstruction case should be brought to justice. Meanwhile, on the Georgia phone call, the former official says, politically speaking, this is left up to the people of Georgia, though it does not rise to the level of a criminal case as some would hope — for now.

This comes against the backdrop of the NAACP’s demand for an investigation into Trump’s Georgia call and for Congress to “censure” the president, which could inhibit him from running for public office again.

Congressman Scott, however, offered that the saving grace is that “we are surviving because Democrats and Republicans have not folded to the pressure to defraud the American people in this election.”

Tomorrow, the U.S. House and Senate the congressional leaders will certify the votes in the 2020 presidential election. Meanwhile, Republicans in the Senate are expected to mount a campaign to overturn the certification due to unfounded claims of voter fraud that President Trump has consistently promoted.