EXCLUSIVE: A president could be ousted by his own cabinet if deemed unable to do his job, for a number of reasons including insanity, illness or disability 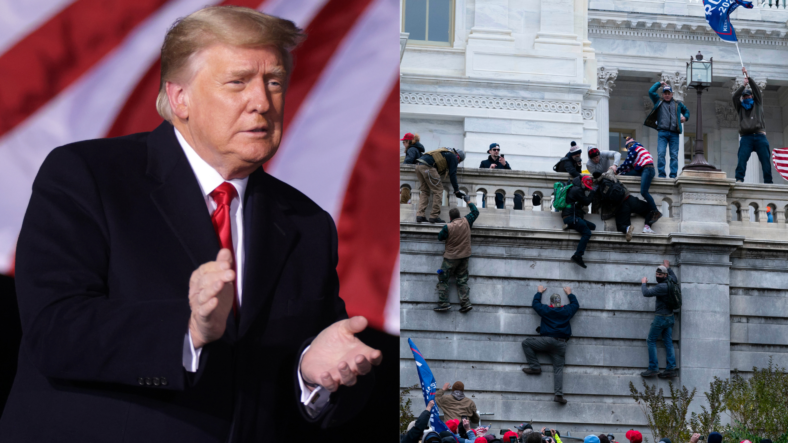 The activities today on Capitol Hill have pushed loyalists to now consider calling for President Donald Trump to leave office before his term is over in two weeks.

The death of a California woman who was fatally shot inside the U.S. Capitol building during the violent, Trump-fueled riots, has forced lawmakers to scrutinize the mental capacity of Trump and question whether he is able to serve out his final days in office.

Read More: Woman is dead after shot inside US Capitol during Trump riots

Congressional leaders are saying that, among other concerns, is why the 25th Amendment should be invoked, which would involve the vice president and the executive cabinet requesting that the president step aside because he is not capable of governing.

A Trump supporter, identified as Ashli Babbit, a 14-year Air Force veteran, was fatally shot in the chest at the Capitol after President Trump stirred up his supporters to the counting and certifying of President-elect Joe Biden‘s Electoral College win.

Congressional leaders were whisked off into an undisclosed location. During their time in hiding, some conversations among leaders included invoking the 25th amendment, sources told theGrio.

A congressional leader, who wished not to be identified, offers that the 25th Amendment to the United States Constitution says that if it’s agreed upon that the president is unable to do his job, for a number of reasons including insanity, illness or disability, the vice president would then take over as commander in chief.

At issue, many leaders in Congress and even in the Republican Party feel the current acting secretaries will not have the valor to do the job of removing the president.

Questions about the president’s sanity have been raised since he was elected president. But today death, anarchy, and national security took center stage as headlines point to this deadly chaos coming at the behest of the president.

Those in the national security community have grave concerns after the mob of white extremists and bigots who desecrated the U.S. Capitol.

PJ Crowley, who served as the assistant secretary of state for public affairs for the Obama administration, lays out the “cost” of Trump’s actions: “many within his own party humored him to carry this on. But, what we found today there is a profound cost.”

A long-standing intelligence official, who spoke to theGrio on condition of anonymity, views this as a deep wound in America.

“From a national security point of view we look like a f–king Banana Republic,” the official said. “Nothing could be more dangerous to our image our standing. Our leadership in the world.”