Lee Daniels finally unveiled the first official trailer for his upcoming film The United States vs. Billie Holiday to a group of journalists on Monday morning. The virtual event was moderated by Nischelle Turner and featured a discussion with the film’s stars Andra Day and Trevante Rhodes. The group discussed what went into mastering the look and sound of the iconic jazz singer whose music and influence made her a target for the FBI in the 1940s.

“Whether you are new to the story and legacy of Billie Holiday or know every note she ever sang, I do hope our celebration of this complex woman does justice to a great musical legend and civil rights activist whose artistry resonates as well today, as it did 80 years ago. Hulu releasing this film and giving it a platform to be seen nationwide is a blessing, because as recent events reveal, our country has much work to do in fulfilling its promise of a more perfect union,” Daniels said in a statement. 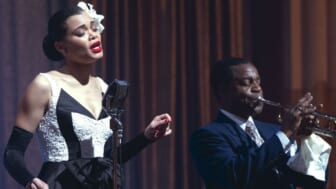 Known as one of the greatest jazz musicians of all time, Billie Holiday spent much of her career being adored by fans across the globe. Beginning in the 1940’s in New York City, the federal government targeted Holiday in a growing effort to escalate and racialize the war on drugs, ultimately aiming to stop her from singing her controversial and heart-wrenching ballad, “Strange Fruit.”

From today’s lens, it is hard for some to imagine the United States government tormenting anyone for just singing a song. Certainly not ‘Strange Fruit,’ her protest song against lynching. What crime could the United States government possibly find in amplifying the senseless killing of Black people, Black men specifically, for nothing more than the color of their skin? Why was any entity of the federal government outraged over a now classic American protest song with the lyric “Black bodies swingin’ in the Southern breeze/Strange fruit hangin’ from the poplar trees?”

The harsh truth is Jim Crow wasn’t just in the South. Racism was all over the nation and few knew that as well as Billie Holiday.

As a woman born Black and poor with extremely limited options in Jim Crow America, survival, in and of itself, was a win. Becoming the iconic Lady Day, beloved by both Black and white Americans for her talent, did not shield her. No amount of fame could save her from the punishment reserved for her refusal to stop singing ‘Strange Fruit.’ Unable to outrun her demons, she had turned to drugs early to numb the pain of her rough childhood, her unfortunate choice in men and just the price of living Black and female in America.

And the government, her government, used her weakness, her drug addiction, against her. Fighting unfairly, Federal Bureau of Narcotics chief Harry Anslinger, who founded this country’s infamous “War on Drugs,” hired Jimmy Fletcher, a Black man, to infiltrate her jazz circles and take her down. But their plan hit a major snag when Jimmy did the unthinkable and fell in love with her. It wasn’t enough to save her from a horrific death chained to a hospital bed surrounded by federal agents.

Did the government kill Lady Day? The United States vs. Billie Holiday dares to answer that question.

The United States vs. Billie Holiday will premiere on Hulu on February 26.