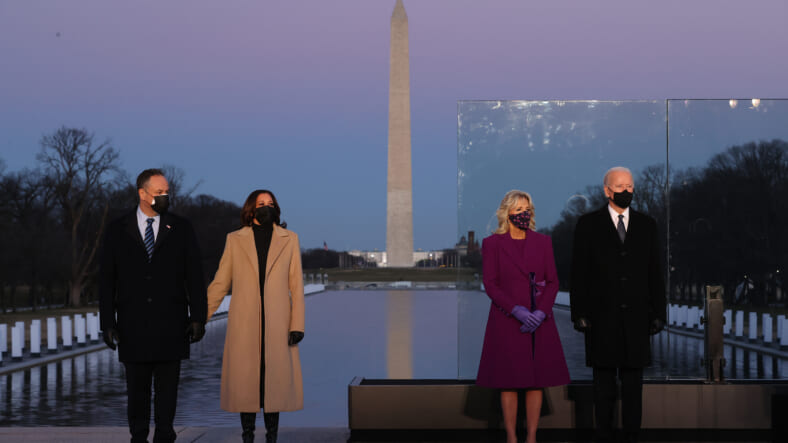 Douglas Emhoff, U.S. Vice President-elect Kamala Harris, Dr. Jill Biden and U.S. President-elect Joe Biden attend a memorial service to honor the nearly 400,000 American victims of the coronavirus pandemic at the Lincoln Memorial Reflecting Pool January 19, 2021 in Washington, DC. As the nation’s capital has become a fortress city of roadblocks, barricades and 20,000 National Guard troops due to heightened security around Biden’s inauguration, 400 lights were placed around the Reflecting Pool to honor the nearly 400,000 Americans killed by COVID-19. (Photo by Chip Somodevilla/Getty Images)
Loading the player...

With the hopes of brighter days ahead, we step into Inauguration Day with dark clouds looming. Those attending this historic event will be wearing masks to protect them from the existing deadly COVID-19 pandemic.

theGrio has learned that the attendees for the inauguration had to adhere to stringent rules and guidelines just to see the event in person. Sources close to the new administration say they had to quarantine for days as one of the demands to attend the historic ceremony.

It cannot be ignored that 400,000 people have died from the virus since its rise in the U.S. early last year.

“The fecklessness, incompetence and dishonesty of Trump and Azar regarding COVID-19, public health measures and the vaccine roll-out has unnecessarily cost thousands upon thousands of lives,” says Dr. Alison Galvani, director of the Center for Infectious Disease Modeling and Analysis and Professor of Epidemiology at Yale University.

One of the first issues incoming President Joe Biden will tackle as president is COVID-19 and its deadly and debilitating effects. Biden is expected to push for the almost $2 trillion COVID-19 stimulus package — dubbed the American Rescue Plan — and mandate mask-wearing on federal grounds.

Biden is making a renewed and revamped push for American citizens to get the COVID-19 vaccination as data shows the anticipated numbers are not being met and Americans remain slow to seek the emergency use authorization inoculation.

COVID is not the only issue the Biden-Harris administration will be tackling. Lifting the Muslim travel ban and rejoining the Paris Climate Accord are top priorities as well.

When asked what else the Biden administration should be focused on when it comes to matters of race, former head of the U.S. Commission on Race, Mary Francis Berry, tells theGrio that there should be a commitment to reparations and “to close the wealth gap.”

“I don’t believe we should give chunks of money … just give it to everybody. What we should do is have a super fund and give it to things like education and other kinds of things with a committee of people who we choose to decide who gets what kind of institutions get it,” says Berry.

She contends those who should get a payout first would be the descendants of those slaves who wrote their names down in the petition for reparations hundreds of years ago. Their names are in the national archives. Some of the names are signed with an “x” as they could not write.

Another item that tops Berry’s list is the policing issue. She wants to “get rid of qualified immunity so [police officers] can be prosecuted [when they wrongfully kill and maim persons].”

When it comes to education, she does not want to see a lot of regulations. Berry quotes Dr. Martin Luther King Jr. reciting, “there is more that needs to be done.” However, “the fear is people will go to sleep because Trump is gone,” she says.

As it related to the issue of the very real threat of “domestic terrorism,” Berry says she is concerned it “could grow the movement larger” if there is a hard focus on domestic terrorism and not enough calls for “unity.”

Matters of race are on the table at this moment with the first woman of color becoming vice president of the United States of America. Humanitarian, activist and musician Stevie Wonder took to Twitter on King Day asking for the Biden-Harris administration to come up with the Truth and Reconciliation Commission similar to that in South Africa after apartheid.

Mary Francis Berry offered that the commission did not result in much for South Africans. She says many commissions don’t, like the Kerner Commission that was organized by President Lyndon B. Johnson in 1968. The 11-member commission found that the report’s findings said the United States was “two countries, one Black, one white, separate and unequal.”

Meanwhile, Democratic Texas Congressman Al Green is proposing legislation for a Civil Rights Czar to make it a cabinet level position. The NAACP is in support of his idea.