EXCLUSIVE: Inauguration Day is a time of great expectancy and transformation, however, this year it is one of the most dangerous times in the nation 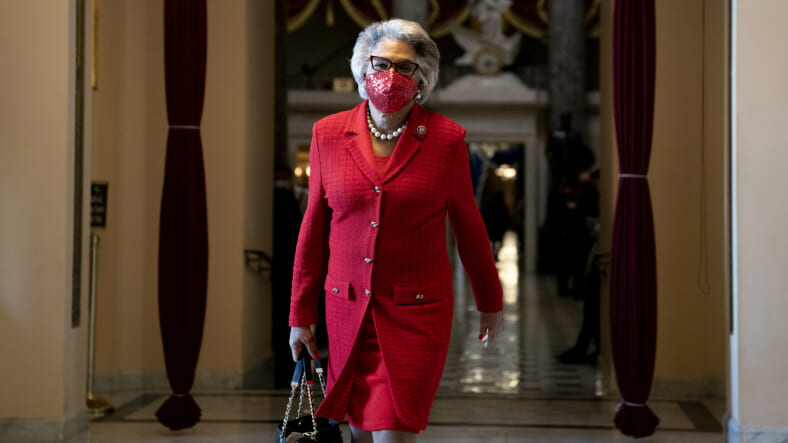 Rep. Joyce Beatty (D-OH) wears a protective mask while walking to the House Floor at the U.S. Capitol on January 13, 2021 in Washington, DC. (Photo by Stefani Reynolds/Getty Images)

Inauguration Day is a time of great expectancy and transformation. This year, however, it is one of the most dangerous times in the nation as we pause for the peaceful transfer of power. The federal quadrant of Washington, D.C. has a military presence synonymous with wartime.

There are reports of at least 12 National Guard members being removed from the inauguration patrol duties. Ten were removed because of the FBI vetting process and two others were taken off duty due to inappropriate text messages and emails. There are 25,000 troops in D.C. to protect attendees at the inauguration after the deadly and unprecedented Jan. 6 Capitol Hill insurrection.

The multi-tier ladder of simultaneous concerns with this inauguration centers around threatened riotous behavior that has some congressional leaders afraid to attend the ceremonious event.

Congresswoman Joyce Betty, the chair of the Congressional Black Caucus tells theGrio she is “going for Kamala.”

“I am going!” she says exuberantly.

Former Senator Kamala Harris will be taking the oath of office as the first woman, Black American and person of South Asian descent to serve as vice president of the United States. Her swearing-in will be a historic elevation to one of the highest offices in the land.

Congresswoman Beatty is going on what she believes will be a momentous day with two guests who are eager to attend the inauguration with her in the midst of the clouds of dangerous insurrection and COVID-19.

Her guests include Melanie Campbell of the Black Women’s Roundtable and Marc Morial of the National Urban League. She acknowledges the fear that surrounds Inauguration Day, admitting a few CBC members are “scared” and ”traumatized” from Jan. 6. Beatty, however, says she will be in attendance in support of Harris and for “our democracy.”

“I am not going to be bullied,” she adds.

The fear of what could come is palpable. However, Congressman Al Green of Texas plans to attend the Hill ceremony as he remembers the death threats against his own life after he launched a 2019 impeachment effort against President Donald Trump, which was ultimately tabled.

From his office on Capitol Hill the congressman laments, “At some point, you have to find something in life that you’re willing to just fight for regardless of the odds. So I’ll be there because I’m not going to let them drag me into hiding.”

Safety is key. When it comes to the process of trying to keep the Capitol safe, Beatty, the new head of the CBC says, “But there is a good process, April, and the fact that they’re weeding people out … they’re finding people with fake IDs, individuals who are trying to pretend that they’re part of the National Guard or a Capitol police officer speaks volumes to the work that they have put into place as a result of all of those five or six lives that were lost in the past week.

She adds, “And also, it’s a good thing that the acting chief of police is a sister.”

That acting police chief is Yogananda Pittman, a Morgan State University graduate who was the deputy chief of the Capitol Hill police force.