Inauguration Day is an occasion of grand pageantry and symbolism

EXCLUSIVE: From the bibles used for swearing-in to memorable performances, the ceremony signifying America's transition power is one of splendor 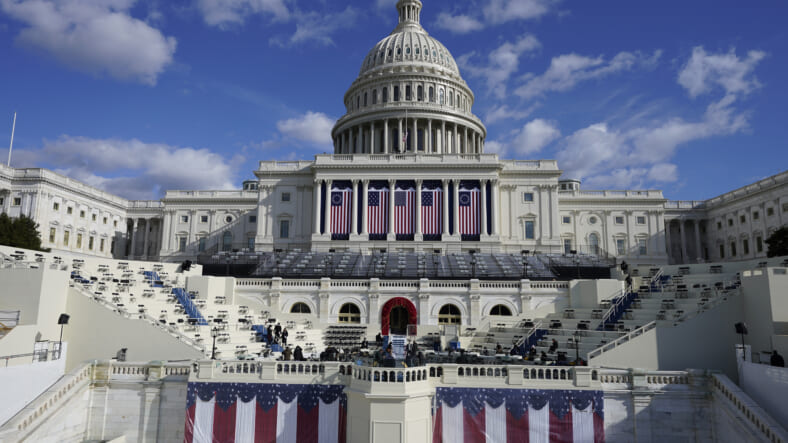 Preparations are made prior to a dress rehearsal for the inaugural ceremony for President-elect Joe Biden and Vice President-elect Kamala Harris at the U.S. Capitol on January 18, 2021 in Washington, DC. (Photo by Patrick Semansky-Pool/Getty Images)

In the past, Jan. 20 drew throngs of people to Washington D.C. with crowds headed to the United States Capitol to witness the spectacular and momentous occasion of the nation’s transition of power.

Due to COVID-19 and security concerns, the inauguration of President-elect Joe Biden and Vice President Kamala Harris will look a lot different. Still, it won’t be without its grandeur.

The Founding Fathers made it so that at noon on Jan. 20, a president and vice president are sworn in with the oath of office. This happens every four years with pageantry and elaborate staging with a grand ceremony. The backdrop is one of the most majestic symbols of this country: the United States Capitol Building.

Valerie Jarrett, former senior advisor to President Barack Obama tells theGrio, “I had the privilege of attending both of President Obama’s Inaugurations. Each time as I walked out of the door of the Capitol onto the platform, I was overwhelmed by the sight of such immense crowds jam-packed on the Mall and surrounding streets, and by the assembly of former presidents, former first ladies and many members of Congress from both sides of the aisle.

“We all wanted to bare witness, the celebrating of an important hallmark of a strong democracy, a smooth and orderly transition of government,” she adds.

The moments are so grand that even in 2018, President Barack Obama took one last look at the crowd and the pageantry, as he was leaving the stage from his second inauguration. He stood in the doorway before going into the building in awe of the historic crowd that was gathered for him. Obama wanted the sight emblazoned in his memory as he would never see it again as president. It was the beginning of his last term in office.

Famed poet and author Maya Angelou read an original poem entitled “On the Pulse of Morning” for the 1993 Bill Clinton Inauguration. And in 2013, Beyoncé sang the National Anthem for Barack Obama’s inauguration in which she was accompanied by the Marine Band. That same year, the Queen of Soul Aretha Franklin sang “My Country, Tis of Thee” at the Obama inauguration.

Some of the pomp and circumstance of the ceremony is the swearing-in and the bibles used. President Obama was sworn in by the chief justice and raised his right hand while he placed his left on a stack of bibles when he took the oath of office. The dual set of bibles included one from President Abraham Lincoln who freed the enslaved. The other bible was personally used by Dr. Martin Luther King Jr.

Speeches are typically soaring and are the blueprint for the next four years. Smithsonian Secretary Lonnie Bunch tells theGrio that the speeches “reminds us of the challenges we face and points us to a better future.” The tone is set by the music, readings and the oath of office generally administered by the Chief Justice of the U.S. Supreme Court, the third brand of government.

For this inauguration, Bunch says Kamala Harris as the first person of color and woman to be inaugurated as vice president gives those who never believed it could happen an example of what’s possible.

Visions of hope and symbols are important for any inauguration. In the past, that hope has been emphasized through the American citizens watching the ceremonious event.

“As important as this inauguration is for the country, watching the swearing-in of the first woman to become vice president is of even greater historical importance,” Psychologist Dr. Randi Miller tells theGrio.

“Watching the first woman of color to be sworn in by a Supreme Court justice of color is a monumental change and a signal of all that is possible. I plan to be on the phone with my daughters watching Kamala Harris take the oath of office so we as women can feel the power of being female.”