When Barack Obama campaigned for president in 2008, he was cautioned by his inner circle to downplay “any topic that might be labeled racial grievance” and not to “do anything that would box me in as ‘the Black candidate,'” he wrote in his recent memoir.

A little more than 12 years later, Vice President Kamala Harris is not being advised to tone down her Blackness or to try and make it more palatable. As she made her way into the White House as the second in command, being the proud alumni of historically Black Howard University is an integral part of her identity and part of her appeal to American voters.

There aren’t many differences in Obama’s and Harris’ tone. Obama referred to personal experiences when he spoke about the nation’s troubled racial history and Harris similarly has been able to interpret her personal encounters with the country’s racial divide for non-Black audiences.

Perhaps the Donald Trump presidency that placed white racial grievance at its center, a summer of nationwide protests over the abuse of Black people in the criminal justice system, as well as the Capitol siege this month in which Trump supporters waved Confederate flags, have all given Harris permission to lean harder into her public identity as a Black woman and to place societal racial gaps higher on her agenda, according to the LATimes.

In the wake of police shootings of Black people caught on video, Americans of all races increasingly cite racial equity as a top issue in opinion polls. The Democratic Party has recognized that it would not have won the presidency, or the pair of crucial Senate run-offs in Georgia this month that gave it control of Congress, were it not for high turnout among Black voters, Black women in particular, reports the LATimes.

While Obama did not shy from addressing the country’s history of racism, he presented himself as a bridge-builder and emphasized that he was raised by white grandparents in an America that had begun the process of overcoming its racist past. 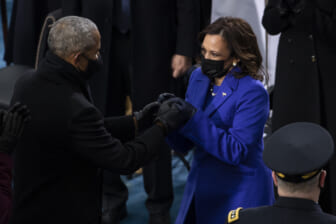 Harris, whose Black father emigrated from Jamaica, wrote in her memoir that her Indian-born mother, who had custody of Harris and her sister, Maya, when the parents separated, “understood very well that she was raising two Black daughters.” She wanted to make sure “we would grow into confident, proud Black women,” Harris said.