Hell no, we can’t ‘co-exist’ with white terrorists

OPINION: Anne Applebaum's essay in The Atlantic is offensive and tone-deaf as Capitol terrorists continue to be coddled and deemed 'misunderstood'

Sophia A. Nelson   |
Pro-Trump protesters gather in front of the U.S. Capitol Building on Jan. 6, a mob that eventually stormed the Capitol, breaking windows and clashing with police officers, killine one. (Photo by Jon Cherry/Getty Images)

I recently read a piece in The Atlantic Magazine last week, titled, “Co-Existence Is the Only Option” by Pulitzer Prize-winning writer and journalist Anne Applebaum. I then had the opportunity to catch her on NBC’s Morning Joe earlier this week and I was not pleased.

The subtext of Applebaum’s controversial, and frankly offensive piece (to me as an American citizen) was, essentially, that the seditionists who took part in the Jan. 6 Capitol insurrection need a path back into society. What’s worse, the sub-headlines blared: “Millions of Americans sympathize with the Capitol insurrection. Everyone else must figure out how to live alongside them.”

Read More: Capitol riot pipe bombs believed to have been placed night before 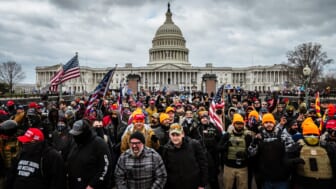 Also Read:
Hell no, we can’t ‘co-exist’ with white terrorists

First, as a Black American who holds a Juris doctorate degree and teaches pre-law at the collegiate level, I always appreciate a good academic discussion about democracy, leadership, how we unify factions and the like. However, Jan. 6, 2021, changed all of that — forever. Here in the United States, for the first time since the war of 1812, our Capitol was under siege. Only this time not from a foreign power or enemy, but from our own citizens.

For me, and tens of millions of Black Americans, what we saw at the U.S. Capitol was more than just some angry Trump supporters, exercising their right to protest and “freedom of expression.” What we saw was reminiscent of the ugly lynching stories, and the angry white mob stories we heard passed down from slavery and Jim Crow, the Rosewood murders in Florida, the Tulsa riots in Oklahoma, the Wilmington, North Carolina riots, and on and on.

When white mobs get angry, they kill people. Just as they did one Capitol Hill police officer, and seriously wounded dozens of others; one officer lost an eye, another had his back broken from being beaten with a flag pole, and many suffered head injuries after being beaten by the insurrectionists. What’s more, several dozen were infected with COVID-19 due to the maskless seditious traitors running wild around the Capitol grounds and building.

Worse than Applebaum’s clueless, tone-deaf article suggesting in part, that we (those of us who actually respect the laws, honor the constitution and don’t engage in sedition) must co-exist with these racists, nazi sympathizers (many wore T-Shirts emblazoned with the words “Camp Auschwitz” or “Arbeit macht frei”).

“And yet they cannot be wished away, or sent away, or somehow locked up. They will not leave of their own accord, and Americans who accept Biden’s lawful victory won’t either. We have no choice except to coexist.”

Ms. Applebaum is entitled to her view, and she is entitled to write lofty thought pieces around the work other nations have done to “co-exist” with terrorism, fringe groups, extremists and the like. But this is America and we do not negotiate with terrorists or terrorism. Had those monsters been Black or Brown, we all know what would have happened to them well before they entered the Capitol building by force and violence.

Thankfully, before he took office President Joe Biden had the courage to say it out loud: that police would have responded “very, very differently” had the group been Black Lives Matter protesters. And he was spot on.

I think what has been hard to take for all of us who love America and who love American democracy, is to watch how these terrorists have been coddled and deemed “misunderstood” by the very Republican leadership that fed them the big lie that somehow Biden did not win the election and that it was stolen from Trump by socialists, and people running a child-porn ring in Washington D.C. (yes, the QAnons embrace such lunacy).

On Thursday, House Republican Leader Kevin McCarthy took a pilgrimage to Florida to kiss the defeated, disgraced, twice impeached Donald Trump at Mar A-Largo. A photo of the two of them was released and then McCarthy, who had weeks before slammed Trump for his part in inciting the riot, took to kissing his ass so he could possibly become U.S. House speaker in 2022. This coming on the heels of 45 out of 50 Republican Senators voting that the impeachment trial of Trump was unconstitutional — sending a clear signal that they will not vote to convict and disqualify Trump as many had hoped.

It is clear that we are living in two very different Americas. The one where over 80 million or more of us voted for a well-known career politician in Joe Biden, a former U.S. Senator, a vice president, a father who lost a son, a wife, and a baby daughter before he was even sworn in to the U.S. Senate. A man who knows sorrow, grief, and how to get along across the political divide. A man who knows kindness, decency, respect and integrity.

I am glad he is our new president. I am glad that the vast majority of us detest and despise what happened at the U.S/ Capitol and we will never “coexist” with hate, racism and mob violence.