An Obama source tells theGrio that the former president was impressed with MahoganyBook's 'phenomenal' work in the community, particularly during the pandemic 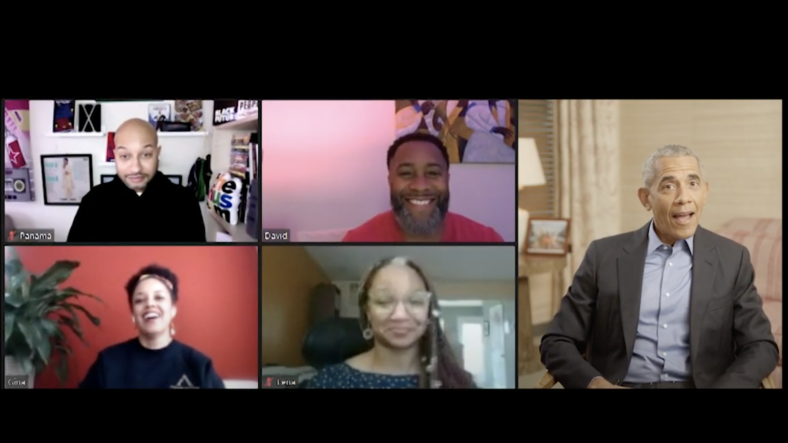 The book club participants were shocked, elated and overwhelmed when former President Barack Obama made a surprise appearance for a Zoom conversation from his D.C. office. The former president engaged in a chat with members of the MahoganyBooks and Very Smart Brothas Bookclub, who got to ask him questions as the owners of MahoganyBooks moderated the hour-long discussion from their Anacostia store about Obama’s book, A Promised Land.

Sources close to the former president tell theGrio, “he was excited to talk through the themes of his book especially as the book has been on store shelves for a few months now. He wanted to hear directly from readers who have spent time with the book, and this seemed like the perfect opportunity.”

The discussion included 18 members of the MahoganyBooks Very Smart Brothas Bookclub and the two owners. The participants had no idea who would be showing up for the session.

MahoganyBooks is a Black-owned website and brick-and-mortar D.C. bookstore that billed the event as a conversation with a former Obama administration official — a truth, however, maybe not exactly who they were expecting!

“There really are no words to describe the opportunity to be seen for doing the work you are passionate about, that’s bigger than yourself. When we received the call that President Obama wanted to be part of our MahoganyBooks & Very Smart Brothas Bookclub it was an entirely née form of validation,” Derrick and Ramunda Young, the owners of MahoganyBooks, said in a statement to theGrio.

“One that continues to affirm how crucial the role Black books play in our communities, in our kids lives and as a nation as a whole. Many people think Black books are for Black people and we’re here to say, this rich history, these stories of joy, innovation and resilience are here for every single person eager to expand their minds and experiences outside of their day-to-day circle because it creates a culture of empathy that we need so much in our works right now.

The couple added: “That’s why reading A Promised Land means so much to us because the world will also get a richer glimpse of the president’s historic journey and that’s crucial for America to see and know too.”

The conversation with President Obama was taped last week and embargoed for the big reveal this week.  Random House made the owners of the store promise not to release details to anyone in the lead up to the conversation until after the publishing house released that it happened.

The owners of MahoganyBooks never imagined this would ever happen. On Nov. 21, the bookstore revealed on Instagram that Obama had followed them on Twitter. They had tweeted and Instagrammed the presidential support with pride not knowing months later the former president would join them in discussing his book and his wife, former First Lady Michelle Obama’s inauguration fashions.

“‘Listen baby, you are gorgeous. You know, I understand completely why you are a fashion icon,'” President Obama recalled to the book club members about his wife’s now-iconic fashion statement at President Joe Biden‘s inauguration.

Obama and his staff took notice of the bookstore and had various conversations about them as they have maintained a presence in the community with activities even during the COVID-19 pandemic. They have described the store as “a rare gem.”

The Obama source tells theGrio of MohanganyBooks, “What they are trying to do is phenomenal and how they keep up their events during COVID is amazing.

President Obama is not new to the Black bookstore experience. While he was a resident of 1600 Pennsylvania Ave., he would travel to a D.C. based Black-owned bookstore during the Christmas holidays to promote buying from Black-owned businesses during the holidays.

MahoganyBooks is located in South East, D.C. with another store opening in the area anticipated in the next few months. MahoganyBooks is also very attractive to authors as they also report to the New York Times Best Sellers List offering authors a chance at its prized ranking.

Not all bookstores in this nation, Black or White, get the honor to report to the prestigious list.

MahoganyBooks has been reporting to the list for years since they were a web-based company and now the reporting to the Times continues as it is both a web and growing brick-and-mortar business.