Police in San Diego, California are asking the public for help to identify a “person of interest” captured on surveillance video in the early morning hours of Jan. 24, when two Black Lives Matter banners were vandalized.

“Let me be very clear. It may take a little longer than we want, but we’ll get you,” said Gloria, “and we’ll hold you responsible for what you do. Because this does not stand in San Diego.”

The banners were hanging at University Christian Church and at Rich’s nightclub. Both were vandalized with purple paint.

A senior pastor of the church, Rev. Caleb Lines, decried what he says the incident underscores.

“What is truly heartbreaking is that this vandalism is emblematic of a deep divide in our country,” said Lines, “where some people do not believe that Black lives matter or that LGBTQ+ lives have value.”

David Thompson, Jr., the chair of San Diego Pride and director of diversity and community life at The Bishop’s School, a college preparatory school in the city, said, “It’s clear that despite momentary milestones in our history, anti-Black racism and insidious white supremacist beliefs exist in the fabric of our nation’s communities.” He applauded the swift action of police and local leadership. 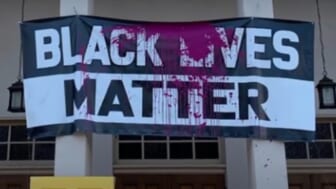 City Councilman Stephen Whitburn noted that the Hillcrest neighborhood, in which the church is located, has historically been a refuge for diverse groups, including the LGBTQ community. Six brightly-colored doors at University Christian Church dedicated to the LGBTQ community were torn down just days after the initial vandalism incident.

“We need to recognize that when one community is attacked,” Whitburn said, “it is an attack on all of us.”

“This was more than vandalism,” maintained Mayor Gloria, standing in front of brand-new doors and under a new Black Lives Matter banner. “This was an attack on our community. We will not shrug off hate against any San Diegan. Racism and bigotry in any form will not be tolerated in our city. We will identify the individual responsible for these hateful acts and hold them accountable.”