Beyond Gorilla Glue: The politics of Black women’s hair

OPINION: The attention that Tessica Brown’s story received is yet another example that for Black women, hair is not simply hair. 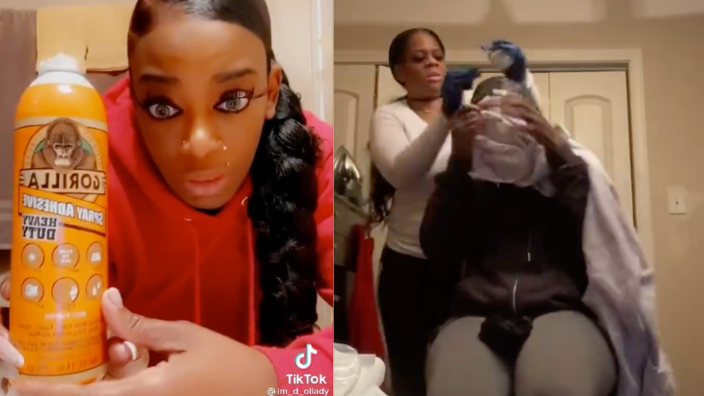 As a collective, our hearts broke when we saw Tessica Brown share on TikTok that she mistakenly used Gorilla Glue on her hair. Brown’s post quickly went viral and thousands responded to #GorillaGlueGirl with empathy, compassion and care — as well as ridicule.

The heavy-duty construction adhesive could not be washed out of Brown’s hair, compelling her to seek medical help to safely remove the Gorilla Glue from her hair. The attention that Brown’s story received is yet another example that for Black women, hair is not simply hair.

Indeed, hair is much more. For Black women, hair is racialized, gendered and classed. It also carries cultural and social meanings. Hairstyles indicated a person’s background, social status and tribe in early African civilizations. In this manner, everything that you would want to know about a person was communicated via her or his hairstyle.

During enslavement, Blacks often lacked the resources to maintain their natural hair and resorted to materials that were less than ideal to care for Afro-textured hair. Once emancipated Blacks — particularly Black women such as Madame CJ Walker — began to develop and market their hair care routines.

The health of Afro-textured hair and styling practices of Black women became a signal of self, beauty, and culture. Undeniably, beauty culture and the politics of appearance for Black women were wrapped up in the prevailing stereotypes of Black women: the Mammy, Jezebel, and Sapphire.

Black women seek to challenge or reify aspects of these sexualized, racialized, gendered and classed depictions of themselves through the practice of adornment and hairstyling. Afro-textured hair has been denigrated, politicized, and is now being reclaimed and celebrated. Hair texture is a visible marker of race that simply has different implications for Black women than for men.

Like Tessica Brown, Black women politicians have publicly shared their hair story with the public. Representative Ayanna Pressley (D-MA) drew attention in 2019 for revealing that she suffered from alopecia areata which caused all her hair to fall out.

In an interview with The Root, Congresswoman Pressley was transparent and open in her decision to go public with this news. Her Senegalese twists were an intentional styling decision and now, too, is her signature bald head. The second-term congresswoman noted: “As a Black woman, the personal is political. My hair story is no exception. Sharing a very personal story today to create space for others.”

She is correct. My co-authored book, Sister Style: The Politics of Appearance for Black Women Politics Elites, confirms that Black women’s hair is politicized. Voters have stereotypical beliefs about Black women candidates based on their phenotype.

Those with Afrocentric features – namely, darker skin and unstraightened, naturally curly hair, are viewed as more liberal and therefore, only electable in certain districts. However, in an experimental treatment, we find that voters rate Black women candidates with darker skin and natural hair more favorably than a lighter-skinned Black woman.

We find that Black women political elites are cognizant that their hair is used as a political heuristic, or shortcut, for voters. In a series of one-on-one interviews and a focus group with Black women politicians, they routinely documented how they were assessed by their hairstyling choices. The confluence of electoral politics and Black women’s hair signal what is valued in our culture. The political elites in our study unpack how their hair and hairstyling practices vary in significance but all reveal that hair deeply matters in meaningful ways.

We also find generational cleavages in how Black women political elites adhere to or challenge respectability politics or the disciplining of “bad” behaviors of Black people in an effort to uplift the race. For the millennial women in the study, wearing their naturally unstraightened tresses has caused points of contention among older Blacks (particularly women) who do not believe that natural hair has a place in politics.

Conservative styling is preferred in politics yet, younger Black women in our research are challenging this norm and pushing back against eurocentric beauty norms. Similar to Rep. Ayanna Pressley, the women in our book desire to bring their full and authentic self into politics.

They note, however, that some concessions may need to be made along the way – such as having straightened hair on the campaign trail or when meeting with certain groups of constituents – but then, wearing their hair in their desired style at other times.

One respondent shared that “I’m Black and I’m proud. It’s more like, this is my hair. But, the respectability politics is real.”

The historical roots in slavery are omnipresent in Black women’s present-day experiences in American culture and hair politics. So much so that both Tessica Brown’s and Ayanna Pressley’s decisions to share their personal hair stories were met with immediate attention by the public.

The negative comments also revealed an attachment to respectability politics and misogynoir.

Thankfully, the chorus of those who care deeply about Black women and understand the socio-historical significance of Black women’s hair took to social media to support these women with the care and concern they deserve.