Halle Berry and her boo are living their best lives.

Berry and her boo musician boo Van Hunt were seen cuddled up while on vacation on Wednesday. The movie star posted an image to her Instagram stories for her 6 million followers featuring the two on their romantic ski vacation.

The couple were wearing masks and their heads covered as they posed for a selfie.

It looks like the couple are getting close. Back in September, a source told People he has met her two children: daughter Nahla, 12 and Maceo-Robert, 7.

“They are spending a lot of time at Halle’s Malibu house,” the insider said. “She really seems to enjoy the quiet time. Van has met her kids, so it seems pretty serious.”

Another source said they “respect each other and have a great deal in common.” The couple were together for Berry’s birthday in August in Las Vegas.

“Both are very successful and smart, and they seem to be in a mature relationship, it seems like a really good match.” 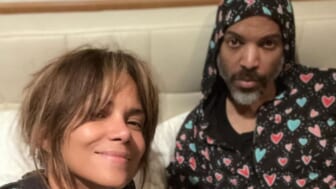 Berry shared a text photo that read “Women don’t owe you sh*t.” She wrote in the caption “& that’s on Mary had a little lamb,” in reference to the viral video, “Where the money resides.”

Read More: Halle Berry on criticism she can’t ‘keep’ a man: ‘Who said I wanted to keep them?’

Her post got support from thousands of commenters, mostly women, including celebrities like model Chrissy Teigen and fellow actress Vivica A. Fox. But there were more than a few detractors who came for Berry in the comments, and she quickly set them straight.

One of them wrote to her: “With all of your accomplishments, fame, beauty, it seems, as if, you CAN’T keep a man.”

Berry’s reply? “Who said I wanted to keep them?” she asked. “I’m all about living your best life, if you make a wrong move, course correct and re-spin and start again!”

Another wrote: “Says the women who can’t keep a man.” Berry responded with “Who says I wanna keep the wrong man? cuz…..I don’t.”

The 54-year-old mother of two replied to many commenters on the post, both the famous and non-famous alike.

Berry said that since becoming the mother she has been more deliberate in changing gender stereotypes.

“If we want to have a future that’s different, that is where it starts,” she said during a virtual panel last month with Sundance Film Festival, when she talked about “how many conversations I’ve had with him, say, since he’s turned five years old, about the differences in boys and girls, and I see how he’s taught to feel like he’s superior, at five, than girls are.”

“I can tell that because we’re having those conversations, he is going to grow as a deep thinker on the subject,” she added. “He’s going to be determined not to just accept it. I keep challenging him all the time, like ‘Well, why is that a ‘girl color?’”

Her directorial debut, Bruised, will be released this year on Netflix.