OPINION: What Biden and many white Americans don’t or refuse to understand is that these new ‘diverse’ commercials are in no way a sign of racial progress 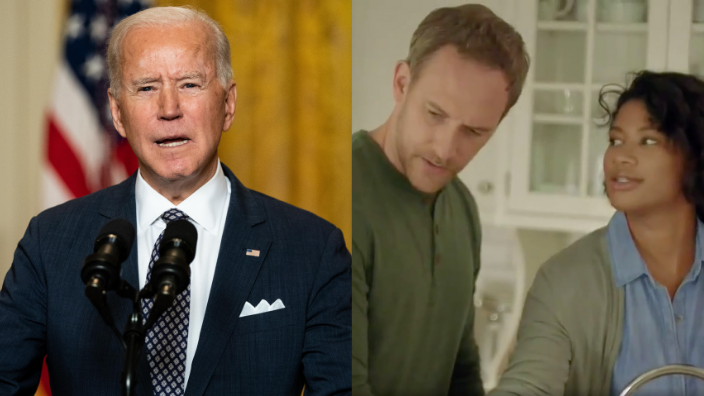 On Wednesday, President Joe Biden held a town hall on CNN where he shared many of this thoughts about how to rescue America from impending doom. With typical Biden charm, which means impassioned answers interspliced between confusing word salad, he tackled everything from COVID-19 to climate change and reminded Americans what competent leadership looks like.

However, it was Biden’s answer on how to address police brutality that highlighted just how detached he, and many white people like him are, from the realities of Black life in 2021. No President Biden, more interracial couples on television doesn’t mean America is becoming less racist.

I’m sure you’re wondering how on Earth Joe Biden ended up talking about interracial relationships when he was supposed to be talking about police brutality. An audience member asked Biden how he would address community and police relations.

AUDIENCE MEMBER: How can we be sure that we don’t over-legislate police officers, so that they can do their job to protect the law-abiding citizens who live in these high-crime neighborhoods, and yet train officers to police with compassion?

By the time they got through “high crime” v.s. “law abiding” and “over-legislation,” that question had more dog whistles than an Omega party hosted by Too Short. However, I’m not surprised Biden didn’t push back on the idea that cops are over-legislated when it’s abundantly clear that police operate with relative impunity when it comes to Black lives. What did surprise me though is what he saw as a sign of improving race relations in America.

“I’m going to say something that’s going to get me in trouble … think about it, if you want to know where the American public is, look at the money being spent on advertising. Did you ever 5 years ago think every second or third ad out of 5 or 6 would be biracial couples?”- Biden

There’s more to unpack in this sentence than in a 24-hour stream of unboxing videos, and like a Russian nesting doll of wanna be woke white ignorance, each surprise is more disappointing than the last.

First, a little background. A colleague and I have been working on a research project about the growth of interracial couples on television and commercials over the last five years. Our work is forthcoming but we have some preliminary data about what is driving this trend and it’s not optimism about race relations.

The last time Black people actually thought race relations in America were getting better was that mystical honeymoon period between Barack Obama beating John McCain in November 2008 and the Summer of 2009 when he got blamed for everything from the Gulf oil spill, to not solving racism in one afternoon at the Beer Summit.

Near the end of Obama’s presidency, about 40% of Black Americans thought race relations had gotten worse. In 2019, after two full years of Donald Trump over 71% of African Americans thought race relations were getting worse. I don’t know who Joe Biden is talking to, but I don’t know one Black person in America who sees the Proud Boys tearing down Black Lives Matter signs in Washington, D.C. and thinks things are getting better just because a Humira commercial features a white dad and his biracial daughter getting ice cream.

What Biden and many white Americans don’t or refuse to understand is that these new ‘diverse’ commercials are not targeted to Black people and are in no way a sign of racial progress. Most interracial commercials on TV are produced to provide white Americans with a sense of comfort that in the face of changing power structures and demographics they will still dominate the racial pecking order. How do we know this? Because the commercials are based on white fantasy not actual demographic changes as Biden suggests.

Over 70% of the commercials run in the last 4 years featuring a Black and white interracial couple featured a white man and a Black woman. In fact, for certain high-end products like luxury cars, you are more likely to see a white man and his Black wife than you are a Black couple. These ads clearly aren’t reflecting America’s demographics, where 70% of Black/white interracial couples feature a Black man and a white woman.

They do, however, reflect the fact that while white couples prefer same race couples in commercials, they really dislike seeing Black men with white women. In a time of racial unrest for white America, images of interracial relationships are a proxy for racial progress as long as the race and gender dynamics don’t disrupt whiteness. Or put more crudely, woke white America wants to believe it can fuck it’s way out of racism, as long as the penis is white.

The uniquely white American, Hollywood and Madison Avenue notion about the transformative nature of interracial sex and marriage is as old as the plantation and twice as ugly. White people gave Halle Berry an Oscar for Monster’s Ball because they believed that bigoted cop, played by Billy Bob Thornton, was cured of his racism after having sex with her (don’t forget he had her husband put to death).

Republican Fitz Grant, who literally suppressed votes to win the presidency, couldn’t be a bigot because he couldn’t get enough of Olivia Pope on Scandal. While Netflix’s Bridgerton may feature sexy Simon Bassett bedding pure white Daphne, remember the only reason that whole interracial world is possible is because a Black woman married a white man and became queen.

There’s a reason there were two Black Bachelorettes before there was a Black Bachelor, and all of them made it pretty clear from jump that they were not interested in Black matches. Today’s interracial commercials are just cutting out the rose ceremony and going straight to the reward.

According to Infiniti, Nissan Rogue and Hyundai commercials, if you’re a white man along with your low APR financing and down payment, you get to show off to your friends and family how woke you are with your fair-skinned but still Black enough wife.

Now I know there will be knee-jerk reactions: What’s so bad about diversity in commercials? You just want to see more Black men with white women! Or you just hate seeing Black women happy with white men! Not at all. This isn’t a criticism of how anybody finds love in their real lives, this is a critique of a multi-billion dollar marketing trend that distorts what’s really happening in America.

Besides, after seeing Black people erased from commercials for most of my life, I could see nothing but straight, queer and trans Black love in commercials for the next 30 years and that wouldn’t be enough. What is problematic about these commercials is they give white people like Joe Biden, and others, a false sense of progress without them having to do any of the ugly sticky work on their own prejudices and bigotries.

When a white man sees these ads he’s reminded that, even in a Black Lives Matter world, he can have access to a luxury car, winter resorts and a Black wife without ever having to do any heavy lifting about race. When a white woman sees these commercials, she thinks she’s got an automatic girlfriend; a suburban Black woman who’s not angry because she’s already been ‘vetted’ by a white man.

These ads aren’t meant for Black Americans but we’re still being used as props so that white America can work out their racial hang-ups during commercial breaks on This is Us.

Black America knows what real progress looks like, that’s why a Black family dancing to Tag Team in the kitchen sells a lot more Geico insurance than yet another interracial couple centering a woke white fantasy.