Rep. Bennie Thompson on why Texas disaster is a ‘national security issue’

EXCLUSIVE: Thompson, the chair of the House Homeland Security Committee, says it's 'only the good people of Texas who are suffering' amid calamity 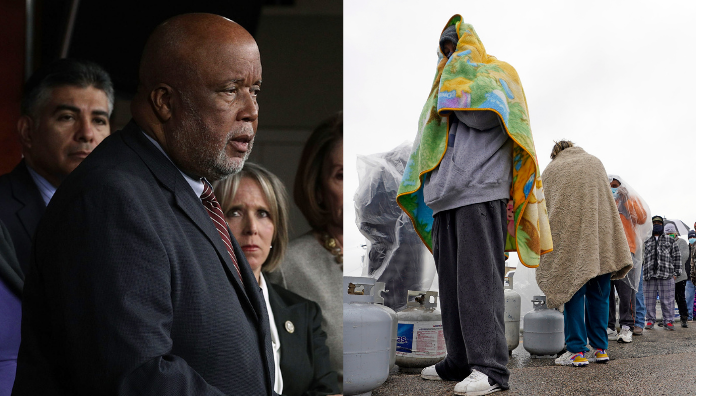 Texas is in a state of emergency and President Joe Biden is expected to sign a major disaster declaration after a request from Texas Governor Greg Abbott after the two leaders spoke Thursday night.

Rolling blackouts, power outages, food and water becoming scarce are the scenarios in some parts of Texas that are facing a deadly cold snap that has shocked not only the state but also the bodies that are trying to find warmth in the midst of freezing temperatures that have dipped below zero.

Read More: Lights come back on in Texas as water woes rise in the South

The nation’s fourth most populated city, Houston, Texas, is one of the many communities impacted by this weather event. The chair of the House Homeland Security Committee, Congressman Bennie Thompson explains how serious this crisis is.

“It’s a national security issue from the perspective that American citizens are at risk … our mission at Homeland, specifically with FEMA, is to respond when state and local resources have failed to take care of their citizens,” Thompson tells theGrio. “So in Texas, for instance, we’re there. We’re the cavalry now.”

Texas has made the ask for help and FEMA is delivering items to include generators and water. FEMA, according to Rep. Thompson, is also prepared to provide shelter and deliver its military assets that can provide food and water — all of which are encompassed in the disaster declaration.

The major compounding issue is that the power in the area is not able to handle the demand for heat. The power grid in Texas is different from other states in that it’s meant to take hot temperatures not cold temperatures.

“There are some federal requirements that we have in every other state except Texas, and so it’s just for that purpose. We have the requirements so exactly what happened in Texas wouldn’t happen,” says Thompson.

Rep. Thompson says “normally this is a seamless process,” however, another problem compounding the issue is the strained working relationship between Houston Mayor Sylvester Turner and Gov. Abbott.

As Texas officials work to figure things out for the sake of Texans across the state, the hurt and cold in Texas continues on.

“Mayor Turner in Houston has made shelters available to the extent that he can. His situation is of such that local assets won’t provide enough support for that situation,” adds Congressman Thompson.

“That’s where the state comes in and the state says, OK, we’re here, but we need help. And that’s where the federal government comes in. Normally, it’s a seamless process, but in this instance, it’s not. And it’s only the good people of Texas who are suffering.”

On a call with reporters on Thursday, Biden Homeland Security advisor Dr. Liz Sherwood-Randall said that in Texas, FEMA has “made 60 generators and fuel available to support critical sites like hospitals and water facilities, adding, “It has moved in 729,000 liters of water, more than 10,000 wool blankets, 50,000 cotton blankets, and 225,000 meals.”

Declaring Texas a major disaster will also open up additional funds through FEMA for relief efforts.