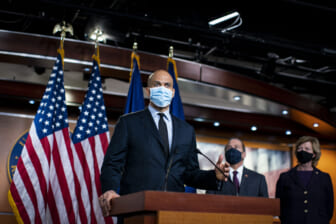 Four lawmakers have reintroduced a bill that would make Juneteenth a federal holiday.

“Juneteenth,” observed on June 19, commemorates the end of slavery in the United States and is also known as “Emancipation Day,” “Jubilee Day,” and “Juneteenth Independence Day.”

On June 19, 1865, in Galveston, Texas, Major General Gordon Granger issued General Order No. 3, which announced that, in accordance with the Emancipation Proclamation, “all slaves are free.”

Juneteenth is currently recognized by 47 states and the District of Columbia as an official state holiday or observance. In 1980, Texas was the first state to recognize Juneteenth as a paid holiday.

Senator Smith said of the legislation, “It’s long past time that we recognize Juneteenth—the oldest celebration of the end of slavery in the US—as a federal holiday. Last year we introduced the Juneteenth National Independence Day Act, and while it was blocked on the Senate floor, we’re not backing down. This is a bill with ample bipartisan support and I will keep fighting until it becomes law.”

Read More: Cory Booker attends inauguration with girlfriend Rosario Dawson by his side

“We commemorate Juneteenth as the day that word of emancipation finally reached enslaved people in Texas in 1865, but we know the struggle for true Black liberation continues,” said Senator Markey in a statement on Thursday.

“For too long, we have tried to whitewash our nation’s history instead of confronting the uncomfortable and painful truth. This legislation to make Juneteenth a federal holiday is but one step we can take to begin to right the wrongs of the past and ensure equal justice in the future,” Markey continued.

Jackson-Lee noted that Juneteenth “must always remain a reminder to us all that liberty and freedom are the precious birthright of all Americans which must be jealously guarded and preserved for future generations.”

A copy of the legislation can be found here.