Nora Langdon shared how her desire to get into shape led to breaking records and inspiring others in the weightlifting world.

Nora Langdon began weightlifting at the age of 65 and at 78 still continues to set world records in the competitive field. 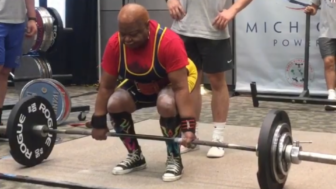 Fox 2 Detroit reported Langdon began to show interest in lifting when she realized she wanted to get into shape. Thirteen years ago, while working as a realtor she decided to begin training, though she was apprehensive at first.

“It was intimidating but I said I’m not going to look at everybody else, I’m just going to look at my trainer and keep going,” Langdon told the news outlet. She continued, “You just have to put your mind to it. Your mind and your body and be consistent. As long as you’re consistent you can do it.”

Her determination was also shared by her coach, Art Little, who admitted to being nervous to begin her training due to her age. They began with the basics and the more the pair trained, the more Langdon fell in love with lifting.

“She watched us getting ready for a powerlifting meet and asked a question – I’ll never forget it; ‘Do you have any old broads doing that?’ And I said ‘Yeah,’ Little told Fox 2. “She came and watched us at the meet and said she wanted to do it.”

“She’s really been an asset to the gym, and to me, and to the whole powerlifting field,” Little continued. “To see somebody at that age doing what she’s doing it’s a blessing.”

Since she started Langdon has set 19 world records for her age group. Currently, she deadlifts close to 400 pounds, squats 380, and bench presses up to 185.

“When I squat this is what I say, I say ‘Holy Spirit fall on me,’ and I just do it and I come right on up,” she said. “Get up off that couch, go walking, walk a mile starting, then you can end up with five miles. You just have to be consistent and keep doing it and don’t let your mind or people tell you you can’t.”

According to Barbend, Langdon’s most recent competitive appearance was at the 2020 American Powerlifting Federation (APF) Michigan State Meet in the 82.5-kilogram class. There she finished first-place in the bench-press-only competition. Her most recent full meet was the 2019 American Powerlifting Federation (APF) Nationals, which she won with a total of 420 kilograms, Barbend reported.

Since she began competing in 2007, Langdon has entered 22 sanctioned meets and of those 22, she’s won 20. Her 19 world records in the 90-kilogram weight class include holding the title for the raw deadlift, raw benchpress, single-ply squat, single-ply benchpress, multi-ply squat, and the master’s deadlift.

She uploads weightlifting videos to her Instagram account @Jazzienora where she welcomes “positive words only,” and flexes a little bit with the caption “Don’t wish your girlfriend could squat like me” in her bio.