Trina reveals she’d like a Verzuz battle with Lil’ Kim

As Verzuz continues to announce legendary pairings, Trina has revealed she’d like a Verzuz battle with Lil’ Kim in a recent radio interview.

Appearing on 103.5 The Beat, rapper Trina was asked who would be the best opponent if she were to do Verzuz. Trina immediately said she would want to do it with rap legend Lil’ Kim, calling her “that b***h.” 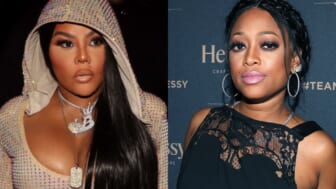 The rapper also revealed, “[Lil] Kim is that b***h. Let’s be very clear…When I came into the industry, this is who I looked at, looked up to. This is the lyrics that I recited, this is what made me know that it’s okay to talk that lethal shit… therefore, I would feel like that’s equivalent because Kim is legendary, and she got mad records.”

She also made it clear that it wouldn’t necessarily be a battle between the two rappers, but more like a celebration of their legacies and catalogs.

She explained, “I[t] won’t even feel like a competition because it’s a family thing. I’m probably gonna be so much more engaged in her records than anything cuz it’ll go back to when I first heard her, so I’ll be in my vibe, like fanned out…That’s just what I would say. That’s just my little opinion, but nobody reached out.”

Lil’ Kim and Trina happen to be close friends, which would make for a great Verzuz pairing. Kim shared a picture of the two on her Instagram, describing how the pair bonded over the loss of their respective parents.

She wrote in the caption, “On this very day I found out my Daddy passed away. I was so distraught and had to put on a brave face and keep working because I had a show that same night. When @trinarockstarr came into my dressing room we instantly bonded.

She comforted me and it was exactly what I needed in that moment. It’s as if her Mom and my Dad brought us together and healed our friendship. ?❤️ We both have angels watching over us.”

Read More: Kelly Rowland on celebrating women in her life: ‘I’m rich in my female energy’

Black Twitter instantly went in with their thoughts on the pairing, with mixed results. One user was skeptical of Trina’s catalog measuring up to Lil’ Kim’s, writing, “Not Trina thinking her catalog could even be in a Verzuz with Lil Kim’s catalog.” Another user shared that sentiment, writing, “Trina know her and Kim don’t go together.”

Some fans are excited for the potential pairing, however. Yung Miami of City Girls shared her opinion on the duo, writing, “Me tooooo I love Kim to death but I gotta go with Trina.”

As theGrio previously reported, fans have an SWV and Xscape Verzuz to look forward to. Xscape’s LaTocha Scott confirmed the news to TMZ yesterday, saying, “So, we’re getting ready to do this Verzuz battle with Xscape and SWV. It’s going down May 8th. So, I’m out here just representing for my home team.”

That legendary pairing is set to air on May 8th.