“I want to thank everyone for reaching out to me and offering their love and support,” Falynn posted on social media

Falynn Guobadia has finally spoken out amid the Real Housewives of Atlanta drama surrounding Porsha Williams and her almost-former husband, Simon Guobadia.

Read More: Porsha Williams to star in three-part Bravo special about her life

Guobadia, who is a friend to the reality TV show, and not a full-time cast member, went on Instagram to say she appreciates the support she is receiving after Williams announced her engagement to Simon.

“I want to thank everyone for reaching out to me and offering their love and support,” Falynn, 31, posted on Instagram. “At this time, I am focusing on finalizing my divorce and healing. Sending positivity to all of you.”

Social media was in shambles on Tuesday after Williams announced her engagement.

In an Instagram post, after Williams revealed the news, she immediately addressed the elephant in the room: Her new fiancé is not quite divorced to the Real Housewives of Atlanta friend, per theGrio.

“Falynn and I are not friends, and Simon’s divorce has been settled,” Williams wrote after penning “for all of you that need facts, I get the optics, but Simon filed for divorce from a previous marriage in January.”

“I had nothing to do with their divorce filing,” she contended. “That’s between the two of them.”

Williams said her relationship with Guobadia began “a month ago.” She says that they are “crazy in love.”

“I know it’s fast, but we are living life each day to its fullest,” she posted. “I choose happiness every morning and every night. Tuning out all negative energy and only focused on positive wishes. He makes me so happy and to me, that is what matters most.”

Williams said that Guobadia and Dennis McKinley, the father of her daughter, Pilar Jhena, are “committed to being respectful and supportive of my happiness in this situation, as well as being the best co-parents they can be to baby PJ.”

She added: “Two Black men stepping up and being amazing people—let’s praise them.”

Simon Guobadia is an Atlanta businessman who is chief executive officer of SIMCOL Group, which is a holding company for several businesses, including ones in entertainment and film production.

Amid Simon’s engagement announcement, a video surfaced of Falynn proposing to an unidentified man in an Atlanta bowling alley. The video has since been deleted.

Though the Guobadias’ have reached a settlement agreement, their divorce is not yet finalized, per PEOPLE. 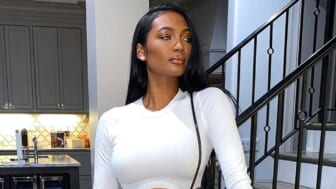