A Florida man is facing several charges after he reportedly kidnapped and assaulted a woman then threatened her with more physical violence unless she created an OnlyFans account. 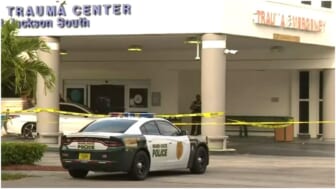 According to a local Fox affiliate, authorities from the Clearwater Police Department say that on May 19, Demarko Spears, 30, went into a fit of rage after he discovered via Snapchat that the victim had gone to a strip club without him. That evening, he called her phone a whopping 100 times in an effort to get in contact with her.

Around 7a.m., the woman in question finally called him back which led to a verbal altercation. Police say Spears then drove to the victim’s home and when she got into his car to speak to him, he responded by slapping her across the face and made threats to impede her child’s visitation.

“Spears drove the victim around throughout the day trying to make her open the OnlyFans account at her expense, though he told her he would get any money made off of the video,” read the Fox News report.

“He also ordered her to cash her paycheck and give him all of the money. She tried to flee when he pulled up to a Mid-Florida Credit Union to cash the check, but he pulled her inside the vehicle and drove away.”

When Spears later drove to a Costco parking lot, the victim tried again to escape and called 911. When the suspect caught up with her, he allegedly tackled her to the ground and grabbed the phone from her, along with her identification, before fleeing the scene.

As a result of their violent tussle, the victim sustained abrasions on her knees, left elbow, and left shoulder.

The next day Spears was arrested and is currently facing charges of extortion, strong-arm robbery, felony battery, grand theft, false imprisonment and tampering with a witness.

The most salacious part of the story of this brutal attack is that fact that Spears was attempting to coerce his alleged victim into filming herself engaged in sexual activity with him and another woman to create an OnlyFans account as a source of income.

The London-based content subscription site used to be popular amongst sex workers and their clientele, but over the last few years – particularly during the financial adversity spawned by the COVID-19 pandemic – the service has made its way into the mainstream.

As we previously reported, last year when Beyoncé and Megan Thee Stallion released the “Savage” remix, the verse in which Beyoncé references two popular online platforms in one bar instantly raised some brows.

“Hips TikTok when I dance, on that demon time, she might start an OnlyFans,” she raps over the J. White Did It produced beat.

On their official website, OnlyFans describes itself as “a very powerful and useful tool for YouTubers, fitness trainers, models, content creators, public figures and influencers.”

But in a statement provided to Rolling Stone, the company said, “Beyoncé, and any artist, are welcome to join OnlyFans at any time to foster a deeper connection with their fans.”