In reaction to the news about Kyrie Irving's ankle injury, fellow players and fans have filled social media with well-wishes for him with one notable exception being from former Boston Celtics player Glen “Big Baby” Davis.

On Sunday night, Brooklyn Nets point guard Kyrie Irving sustained an ankle injury that will keep him off the court for an unknown time.

“I have no idea what is going to happen with [Irving] in the coming days. We will cross our fingers and hope that it is better than I don’t know — better than what — better than missing the next game?,” said Nets coach Steve Nash. “We all have to pitch in. We all got to play together.” Later on Sunday, Nash also confirmed that Irving’s X-rays came back negative and that he will undergo more tests in the near future. 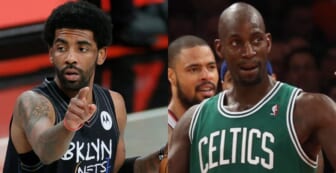 In reaction to the news, fellow players and fans have filled social media and the Twitterverse in particular, with well-wishes for Irving, with one notable exception being from former Boston Celtics player Glen “Big Baby” Davis. In a now-deleted Instagram post published on Sunday, Davis wrote “that’s the same ankle stomped on lucky with,” and included a shrugs emoji.

In that post, Davis flashbacked to an incident from last month in which Irving stomped on the Celtics’ Lucky the Leprechaun logo following a tense game between the Celtics and the Nets. That stunt drew the ire of Celtics fans who called Irving out on social media.

“The amount of people trying to defend Kyrie Irving – basketball talent, emotional child – is stupefying. He’s great at hoops. But as he displayed tonight postgame with his logo stomp, he sucks at being mature, even after a big win and huge effort,” wrote one Twitter user about the incident. 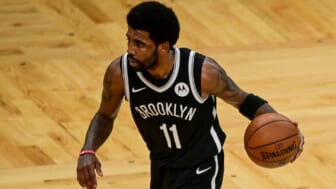 Obviously, Davis was offended by Irving as well and hasn’t forgotten about it. Many are now questioning Davis’ maturity.

“Glen Davis making sly comments about Kyrie Irving‘s injury all because he stomped on a yt cartoon imaginary character. Going so hard for a team that don’t really care about him,” added another user.

“Real worst human-beings laugh at other’s injury. @ http://nba.ball.is.life @ gbbabydavis, Glen Davis. They don’t have any class, EQ, IQ & hearts,” one user tweeted on Sunday. Some have even taken shots at Davis’ weight and athletic skill in comparison to Irving’s.

“Glen Davis has never been on the same level as a Kyrie Irving so he can sit his fat a$$ down,” another Twitter user commented.