"You didn’t discern who you were catering to and you gave your little pearls to swine."

The cancel culture movement has infiltrated R&B and now the loonies want to put the kibosh on Destiny’s Child single “Cater 2 U,” off their final album “Destiny Fulfilled,” released 17 years ago.

The Grammy-nominated track has been reclassified as a “slave” song due to its lyrics that includes lines like, “My life would be purposeless without you,” “Whatever your desire, I’ll supply ya,” and “When you come home late, tap me on my shoulder, I’ll roll over.”

Women are especially bothered by the lyric “Baby, I heard you, I’m here to serve you.”

Destiny’s Child member Michelle Williams has weighed in on the newfound hate for the hit single. In a video message posted on social media, she used a cartoon filter and jumped into character as Merleen, saying, “My name is Merleen and I heard that y’all wanna cancel the song “Cater2U” by Destiny’s Child? Oh honey, you didn’t discern who you were catering to and you gave your little pearls to swine, don’t be mad at Destiny’s Child!”

Williams caption read, “I know it was all jokes but Merleen still wants to add her commentary!!” Peep her response via the clip below. 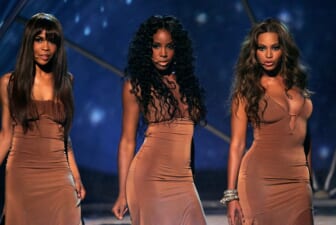 As theGrio previously reported, the critique kicked off on Saturday, June 5th, when a Twitter user with the screen name @TheBaddestMitch posted “Me listening to “cater 2 u” along with a meme of reality star Erica Dixon making a skeptical facial expression.

“Beyoncé lost me in the first verse when she said “my life would be purposeless without you” Then she followed later with “I’ll brush your hair. Put your durag onnnn” Do you know how particular black men are about their durag tying technique? It’s too much,” explained one user.

One Instagram commenter noted that “THOTS” have been triggered by the lyrics as they prepare for Megan The Stallion’s “Hot Girl Summer.” For these individuals, catering to a man does not vibe with their main goal of using males for sex and money.

Another user blamed “Birkin bags” for the angry reaction to the 17-year-old song released in 2004.

One IG user wrote, “Shoutout to all the women that cater to their men. Don’t let these DoorDash women pollute your mind.”

Back in 2018, Michelle Williams took to social media to admit that she herself was struck by the “unrealistic” lyrics when she heard it unexpectedly playing while having a meal with her former fiance Chad Johnson. 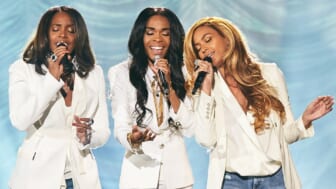 “Cater to You comes on and I made this face,” she wrote in her Instagram stories at the time, along with an emoji of someone rolling their eyes.

“Because he’s waiting on the first and second verse to be fulfilled one day,” she continued. “I wrote my verse about empowering and uplifting the man.”

“I wish you would tap me on my shoulder while I’m sleep,” she noted with both the laughing and angry face emojis. “That was Kelly’s promise not mine.”

“I know that I NOW have a man worthy of those first two verses,” she clarified, before admitting, “I was so over the foolishness back then and I was like, ‘I’ll just let you know you’re a good man without all the extra and I’ll always have your back.’”

What’s your take on “Cater 2 U?” Sound off in the comments.