"I don't think either party if it controlled, if it were different from the president, would confirm a Supreme Court nominee in the middle of an election," Republican Kentucky senator Mitch McConnell told radio host Hugh Hewitt on Monday, though the GOP did exactly that in 2020.

On Monday, Republican Kentucky senator Mitch McConnell said it would be “highly unlikely” that a Biden-nominated Supreme Court justice would be confirmed by him and the Republican party if a vacancy opened up in 2024, CNN reports. 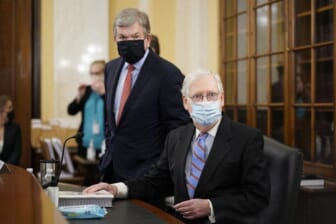 McConnell’s update came from a Monday conversation on the Hugh Hewitt radio show.

“I think in the middle of a presidential election, if you have a Senate of the opposite party of the president, you have to go back to the 1880s to find the last time a vacancy was filled,” said McConnell.

“So I think it’s highly unlikely. In fact, no, I don’t think either party if it controlled, if it were different from the president, would confirm a Supreme Court nominee in the middle of an election. What was different in 2020 was we were of the same party as the president,” the 79 year-old senator added.

In spite of 2020 being an election year, Barrett was confirmed to her lifetime appointment on the Supreme Court in October, shocking Democrats and many Americans who deemed Barrett’s confirmation illegitimate.

In 2016, Republicans also blocked the confirmation of current US Attorney General Merrick Garland, who was nominated by former President Barack Obama.

“Mitch McConnell has stolen two Supreme Court seats and is now openly admitting he wouldn’t fill vacancies if Republicans took back the Senate,” former US Secretary of Housing and Urban Development and 2020 presidential candidate Julian Castro posted in a tweet on Monday.

“We cannot wait for a party in open defiance of democracy to join us in fixing it. We need to pass the For the People Act now.”

McConnell’s latest statement is one of many that demonstrate the Kentucky senator’s blatant opposition to the Biden Administration. Over the past few weeks, Democrats in Congress have zeroed in on the issue of the filibuster, citing what they believe to be McConnell’s manipulation of the practice.

“Democrats didn’t ask people to put us in office so we could enshrine a Senate rule that empowers Mitch McConnell. We asked people to vote for us so we could deliver results. Now is the time to deliver on our promises to the American people,” Massachusetts senator Elizabeth Warren tweeted on Saturday. 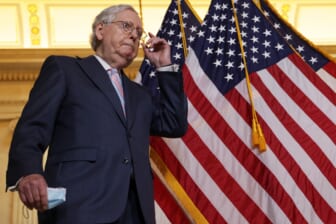 In tandem with McConnell’s remarks about Supreme Court nominees, some Democrats have demanded 82-year-old Supreme Court Justice Stephen Breyer to retire and open up a vacancy, but so far, Breyer has resisted that pressure.