"Jack let me know he's so pleased that I made my presence known because I've put a new spin on how these youngsters interact with each other," Warwick said.

Dionne Warwick may have found a new career path.

The legendary singer who is known for her bops of the 60s-70s may have a future in social media. Warwick has become such a force on Twitter that its CEO Jack Dorsey may have to put her on the payroll.

“I have kind of changed the tone of this thing called Twitter,” Warwick recently told People. “Jack let me know he’s so pleased that I made my presence known because I’ve put a new spin on how these youngsters interact with each other. He said, ‘I should put you on staff’ and I said, ‘Well, let’s talk about some kind of compensation here.'”

The singer hopped on Twitter back in 2020 and has been making headlines ever since. Her tweets have even appeared on Billboards, as reported by theGrio last December. 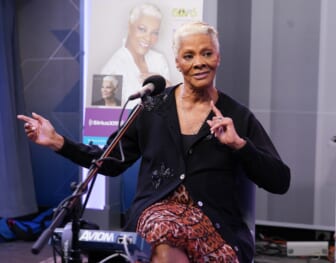 Warwick’s hilarious tweets have made their way to Saturday Night Live, and now Twitter is showing the iconic singer love by putting one of them up on a billboard in New York City. Hers is among several tweets posted on billboards in places including Philadelphia, Los Angeles, and the San Francisco/Oakland area blasting 2020-related Twitter screeds from influencers like Lauren LaBlue, Angie Thomas, and Denzel Dion.

“Please do not bring that foolishness into 2021” is what’s amplified on the Warwick billboard. She posted the tweet on Dec. 11.

The billboard went up in Bryant Park not long after Warwick noticed that Jack Dorsey, the head of the giant social media site, was one of her followers. A fan asked if Warwick was the CEO of Twitter, to which she replied, “Am I, @jack?”

Dorsey replied, “Yes, you are.”

Warwick says keeping it candid on the platform is what has helped her gain success.

“I think people are enjoying my honesty,” said Warwick, who is featured in one of People’s 100 Reasons to Love America this week. “I lay it right out for you. I don’t edit.”

One of the “Don’t make me over” singer’s most famous tweets may be the once she penned about Chance the Rapper.

“Hi, @chancetherapper. If you are very obviously a rapper why did you put it in your stage name? I cannot stop thinking about this,” tweeted Warwick.

“Sorry I’m still freaking out that u know who I am. This is amazing!,” tweeted back the rapper.

Warwick hinted that there may even be a collaboration between the two on the way.

“Hopefully by this August, you’ll be hearing from Chance the Rapper and Dionne the Singer,” said Warwick. “He’s an incredible young man. We’ve talked over the phone several times. I’ve met his father and mother over the phone. We’ve become friends.”

But the 80-year-old isn’t done creating moments on the platform. She recently even made up her own term.

“I called it Twote-ing,” she said. “Not twittering but twote-ing. As in ‘I twoted yesterday’ or ‘I’m going to twote.’ T-W-O-T-E. It’s a softer sound than tweet. You can use it any way you want.”