Exclusive: Civil rights attorney turned politician Maya Wiley tells theGrio that the historical nature of her campaign is not lost on her, and explains why she believes her plan for policing and crime in the city is the best way forward

As a top-tier candidate in the New York City mayoral race, Maya Wiley has an opportunity to make history in the Big Apple as the first woman and Black woman to lead the nation’s largest municipality.

Wiley, who had no political experience before entering the race, tells theGrio that the historical nature of her campaign is not lost on her, so much so that when she cast her early ballot last week she became emotional.

“It was an extremely emotional experience, both because I went into my neighborhood poll site, a high school where my partner’s father went to high school, but I was also walking in the door full of pollsters who all look like me, most of whom are Black women, with a love and an energy that really spoke to the nature of the history-making [and] spoke to the support,” Wiley recalled in a recent interview with theGrio.

“It’s hard to describe when you’ve never run for office before and you’re a Black woman in a city that’s never elected one, and you look down at a ballot and your name is on it.”

Wiley, 57, admitted the experience at the polling site culminated by several months of campaigning and making her pitch to New Yorkers was “really overwhelming.”

On Tuesday, New Yorkers will cast their ballots in the Democratic primary in a ranked-choice voting system for the first time in the city’s history. Despite mayoral contenders, former presidential candidate Andrew Yang and Brooklyn Borough President Eric Adams being pegged as frontrunners in the crowded race of eight, Maya Wiley, the race’s premier progressive candidate, has gained considerable momentum in the last leg of the race. 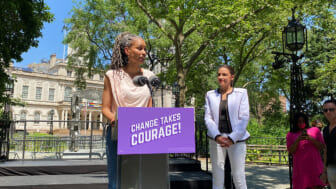 The endorsement from AOC, as Ocasio-Cortez is famously nicknamed, was so significant that Eric Adams issued a campaign statement blasting Wiley and the 31-year-old liberal U.S. congresswoman over their policy positions on policing in New York City.

“Rep. Ocasio-Cortez and Maya Wiley want to slash the Police Department budget and shrink the police force at a time when Black and brown babies are being shot in our streets, hate crimes are terrorizing Asian and Jewish communities, and innocent New Yorkers are being stabbed and shot on their way to work,” said Adams, who is also a former NYPD officer.

“They are putting slogans and politics in front of public safety and would endanger the lives of New Yorkers.”

When asked about Adams’ statement slamming her policing agenda, which includes slashing $1 billion of the NYPD’s budget and creating a civilian police commissioner, Wiley was restrained in her response.

“I’m not running against anyone else. I’m only running for the kinds of policies and change that I believe we have to have in the city if we’re not going to lose a whole generation of our kids … as a Black woman who knows what it’s like to fear crime and knows what it’s like to fear police violence, it is a lie that we have to choose between those two things,” Maya Wiley tells theGrio.

She did, however, signal critiques of Eric Adams’ past statements on NYPD’s former stop-and-frisk policy, which he reportedly denounced when he served within the department, but has previously called the policy a useful tool in policing.

In 2013, a federal judge ruled stop-and-frisk to be unconstitutional for disproportionately targeting unarmed Black and brown men.

“I can’t speak for Eric, but maybe one of the things that made him feel like he had to attack is that I have been very clear and have been unwavering on this issue of stop and frisk and bringing back an anti-crime unit that, frankly, was the last vestige of a racist, unconstitutional set of practices and policies in the police department that did not prevent crime,” said Wiley. “I want to be very clear and have been very clear, [it] will not come back on my watch.”

“I’m going to [ensure accountability] with a civilian commissioner and with the civilian commission on top of the department that sets the rules of the road, the priorities of policing, and that holds police officers accountable for misconduct, taking that power away from the police commissioner,” she added.

For his part, Eric Adams recently told theGrio that he believes he’s the best candidate to take on New York City’s crime and also bring change to policing in Black and brown communities. “The difference between Eric Adams and the other people who are running is I know how to keep us safe based on my knowledge of public safety and I know how to rebuild the department to get the trust we need and weed out those bad officers,” he said in a recent interview.

But Maya Wiley believes Adams’ plan for the city’s police department is more of the old way of doing things, which she argued has not worked. “I’m going to move us forward, not backward. And if that’s threatening to any candidates and they feel they have to attack when they hear that, I can’t stop them,” she said. “But I’m going to keep my eyes on the prize and that’s our communities doing better, being safer and getting what they need.”