Biden faces growing pressure from the left over voting bill

Although the White House has characterized voting rights as “the fight of his presidency,” Biden has prioritized his economic initiatives

When New York Democratic Rep. Mondaire Jones was at the White House for the signing of the proclamation making Juneteenth a national holiday last week, he told President Joe Biden their party needed him more involved in passing voting legislation on the Hill.

In response? Biden “just sort of stared at me,” Jones said, describing an “awkward silence” that passed between the two.

For Jones, the moment was emblematic of what he and a growing number of Democratic activists describe as a lackluster engagement from Biden and Vice President Kamala Harris on an issue they consider urgent and necessary for the health of the democracy.

Although the White House has characterized the issue as “the fight of his presidency,” Biden has prioritized his economic initiatives, measures more likely to win Republican support in the Senate. And he’s shown little interest thus far in diving into a messy debate over changing Senate rules to pass the legislation on Democratic votes alone.

But as Democrats’ massive election legislation was blocked by Republicans on Tuesday, progressives argued Biden could not avoid that fight much longer and must use all his leverage to find a path forward. The criticism suggested the voting debate may prove to be among Biden’s first major, public rifts with the left of his presidency.

“President Obama, for his part, has been doing more to salvage our ailing democracy than the current president of the United States of America,” Mondaire said, referring to a recent interview in which the former president pushed for the legislation.

The White House argues that both Biden and Harris have been in frequent touch with Democratic leadership and key advocacy groups as the legislation — dubbed the For the People Act — moved through Congress. Biden spoke out forcefully at times, declaring a new Georgia law backed by Republicans is an “atrocity” and using a speech in Tulsa, Oklahoma, to say he was going to “fight like heck” for Democrats’ federal answer, but he left negotiations on the proposal to Hill leaders.

On Monday, in advance of the vote, Biden met with Sen. Joe Manchin, D-W.Va., at the White House to discuss both voting rights and infrastructure.

But Biden didn’t use his clout to work Republicans, who have expressed staunch and unified opposition to any voting legislation, arguing Democrats are pushing an unnecessary federal takeover of elections now run by state and county officials.

Biden spent much of the month focused on foreign policy during a trip to Europe, encouraging Americans to get vaccinated and selling his infrastructure plan to the American public. He tasked Harris with taking the lead on the issue, and she spent last week largely engaged in private meetings with voting rights advocates as she traveled for a vaccination tour around the nation.

Those efforts haven’t appeased some activists, who argue that state laws tightening election laws are designed to make it harder for Black, young and infrequent voters to cast ballots. The best way to counter the state laws is with federal legislation, they say, and Biden ought to come out for a change in the Senate filibuster rules that require 60 votes to advance most legislation.

“Progressives are losing patience, and I think particularly African American Democrats are losing patience,” said Democratic strategist Joel Payne, a longtime aide to former Senate Majority Leader Harry Reid. “They feel like they have done the kind of good Democrat thing over the last year-plus, going back to when Biden got the nomination, unifying support around Biden, turning out, showing up on Election Day.”

Still, there could be a silver lining for Democrats in the ongoing battle over voting rights: The issue is a major motivator for progressives and may serve to drive enthusiasm among Black voters as well, potentially driving engagement in a midterm year where Democrats are certain to face a tough political climate.

Harris is expected to continue to meet with voting rights activists, business leaders and groups working on the issue in the states, and will speak out publicly on the issue aiming to raise awareness of new voting laws and to pressure Republicans to get on board with federal legislation.

She watched the legislation fail to advance to debate on Tuesday, in her role as president of the Senate, and coming off the floor told reporters that she and Biden still support voting legislation and “the fight is not over.”

Ezra Levin, co-executive director of Indivisible, a progressive grassroots group, said it’s been nowhere near the level of advocacy the public has seen on the infrastructure bill.

“The president has been on the sidelines. He has issued statements of support, he’s maybe included a line or two in a speech here or there, but there has been nothing on the scale of his public advocacy for recovery for COVID relief, for roads and bridges,” Levin said.

“We think this is a crisis at the same level as crumbling roads and bridges, and if we agree on that, the question is, why is the president on the sidelines?”

White House aides push back against any suggestion the president and vice president haven’t been engaged on the issue, and say his laissez-faire approach to the negotiations is based partly on his experience as a senator and his belief that his involvement risks undermining a deal before it’s cut. 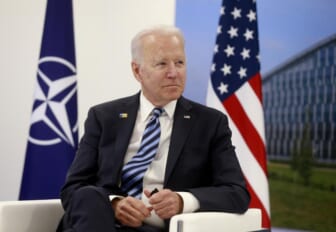 But in private, White House advisers see infrastructure as the bigger political winner for Biden because it’s widely popular among voters of both parties, a White House official said. Passing a major infrastructure bill is seen within the White House as going further towards helping Democrats win in the 2022 midterms and beyond than taking on massive voting overhaul that had a slim chance of passage without a debate over filibuster rules, said the official, who requested anonymity to discuss internal talks.

Embracing filibuster changes, in particular, risks undermining Biden’s profile as a bipartisan dealmaker and could poison the delicate negotiations around infrastructure, where the White House insists it still sees opportunity for bipartisan compromise.

“He does have to preserve some negotiating power, and his brand probably does not compute with being at the tip of the spear on reforming the filibuster,” Payne acknowledged.

Still, other Democrats say it’s time for Biden to get out front on the issue. Rep. Colin Allred, D-Texas, said the proposals Republicans are looking to pass in his home state are “more explicit and more dangerous than anything I’ve ever come across.”

Allred said that the voting fight increases pressure on Biden to take the leadership on the filibuster fight.

“We do need President Biden to make that a priority, because if you’re going to talk about supporting the underlying legislation, it really doesn’t matter if we don’t have way to get past the filibuster,” he said.