EXCLUSIVE: U.S. House Speaker Nancy Pelosi exclusively sat down with theGrio to discuss the most pressing issues in Black America and the nation at large — voting rights, policing and domestic extremism.

House Speaker Nancy Pelosi exclusively sat down with theGrio to discuss the most pressing issues in Black America and the nation at large — voting rights, policing and domestic extremism.

The wide-ranging interview with the Speaker took place in the Speaker’s Ceremonial Office and Statuary Hall, one of the bellies of the insurrection, and the setting backdrop moved Pelosi to share that she would create a Select Committee to probe the Jan. 6 riot.

“This is why we have to have the investigation, which is similar to 9-11 [commission],” Pelosi told theGrio.

The committee is considered the top option for finding answers to many of the questions swirling around the deadly insurrection.

She added firmly, “I still hope for bipartisan, nonpartisan commission,” but she emphasized that “Republicans won’t go for that.” 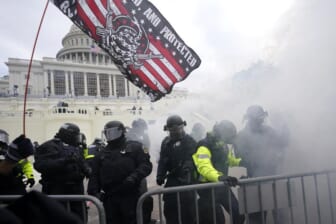 “We’ll go for a select committee to determine the truth of what happened that day. And the truth means … How was it, how did it start, what are the causes of it in terms of the attitude of the American people? But then, more particularly, how is it financed, who started all of this? The public has a right to know,” Speaker Pelosi added.

When it came to matters of the hot button issue of voting rights, Pelosi expounded a great deal on the moment and the long view on the issue that she says, “has to happen.” We talked extensively in the Ceremonial Room of the House, a room where House leaders welcome the president and heads of state.

But Reverend William Barber says “We are a long way from victory” in regard to West Virginia Senator Joe Manchin’s recent support of moving the For The People Act for debate. Republicans, however, prevented such debate from happening on the Senate floor on Tuesday.

Barber told theGrio plans to march on the Supreme Court on Wednesday with people of all races to apply more pressure on the U.S. senator, who has been slow to support the legislation until recently when he offered up his own version known by some as the Manchin compromise.

Barber contends Manchin moved in part because white Republicans in West Virginia put pressure on him and felt that Manchin was lying that they did not want voting rights. They understood the realization that Manchin’s efforts would not only hurt Black and brown people but people from all walks of life.

Another source working anonymously with Manchin says the negotiations with the Democrat from West Virginia are “delicate.”

“Let me just say that while there may be division here among Democrats, the Republicans here are not supportive of voting rights.

The speaker maintains that Republicans across the country outside of Congress are overwhelmingly supportive of H.R. 1, which she noted was partially written by the late civil rights icon Rep. John Lewis in an effort to end voter suppression.

“There’s provisions in there for having redistricting, not be partisan as respect for small donors and ending big, dark, special interest money, suffocating the airwaves. This is about democracy,” she said.

“So we think that that we will pass and we will pass separately the other John Lewis bill (The John Lewis Voting Rights Act), which is the voting rights bill. We must — this is a fight. This is about fighting for America’s democracy. Nothing less is at stake than that now.”

Pelosi called out Republican Senate Minority Leader Mitch McConnell who she said “has been on the case of fighting [against] a freer, more democratic system for a long time.”

“Well, that’s going to be a Senate matter for them to deal with, and they’re going to just have to make decisions … it’s voting rights, it’s gun violence protection, it’s the [George Floyd Justice In Policing Act], just take each bill and see how members of the Senate decide that they will either pass it or not, depending on the number that is needed,” she explained.

Given the filibuster rule, the aforementioned bills would need a 60-majority vote, but with a 50-50 split in the U.S. Senate between Democrats and Republicans, it seems unlikely that 10 Republicans will vote in the affirmative. And without the elimination of the filibuster, which both Democratic Sens. Manchin and Kyrsten Sinema have rejected, the bills are essentially stalled.

“Senator Robert Byrd, who started the Byrd Rule and all that, he, shall we say, circumvented the filibuster rule many, many times. So we’re hoping that Senator Manchin, with all the respect and reverence that he has for Senator Byrd, will follow his example in many ways,” Pelosi said.

The Speaker also noted that another tactic to gain traction on these important national issues, affecting Black and brown communities in particular, is the court of public opinion. “As Lincoln said, public sentiment is everything,” she said. “But for the public to weigh in, the public has to know.”

Pelosi highlighted a “big campaign” from Democrats, highlighting a recent town hall headlined by former President Barack Obama and former Attorney General Eric Holder on the importance of H.R. 1 and its connection to the Jan. 6 insurrection.

In 2006, then-President George W. Bush signed the reauthorization of the Voting Rights Act that put a 25-year extension of the law. Bush also traveled to Selma, Alabama to commemorate one of the most significant voting rights marches in history known as Bloody Sunday.

The California Congresswoman said she takes “great pride” in the fact that the authorization bill was written in her office by members of the Congressional Black Caucus, including John Lewis, John Conyers, Mel Watt, gathered and wrote the bill.

“We were Democrats in the minority,” she emphasized, “but they respected the views of the Congressional Black Caucus on that subject. The bill passed overwhelmingly in the Senate, not one dissenting vote.

“Senator Frist, the majority party leader, and I walked down the steps of the Capitol together in celebration of passing that legislation. President Bush signed it. He then came to Selma for the 50th anniversary of Selma and spoke with great pride about signing that bill,” Pelosi recalled.

She acknowledged that today’s Republican Party leaders are far different than the Republicans back then.

“It’s very different now. When the [Voting Rights Act] was, shall we say, cut back by the Supreme Court in the Shelby decision, it was one that was very sad for us. But we hoped [Republicans] would come together to fill in what was taken out by the Supreme Court, but they never have,” said Pelosi.

Still, Pelosi vowed that Congress will pass the John Lewis Voting Rights Act and H.R. 1 despite opposition from Republicans. “We must pass that and we will pass it this year,” she said.

How Democrats will overcome the filibuster and do that remains to be seen.