Described as a "new school Western," the star-studded film is set to be one of the year's biggest releases from Netflix.

Get ready, film fans, because Netflix just dropped one of the biggest trailers of the year: A sneak peek at The Harder They Fall, starring Lovecraft Country standout Jonathan Majors, Zazie Beetz, Regina King and more.

The trailer sees the best of young Hollywood’s biggest stars, like Majors and LaKeith Stanfield, come together with mainstays like King and Idris Elba in an action-packed flick with an all-Black cast. Described by Netflix as a “new school Western,” the movie is the feature directorial debut for Jeymes Samuel, who co-wrote The Harder They Fall with Boaz Yakin. 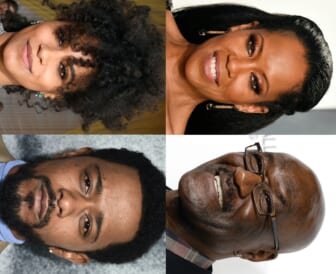 As previously mentioned, the cast is stacked with some major talent that is immediately showcased in the trailer: Aside credits for Majors, Elba, Beetz, King and Stansfield are Delroy Lindo, Danielle Deadwyler, Edi Gathegi, RJ Cyler and Deon Cole.

The official synopsis for The Harder They Fall, per Netflix, reads: “When outlaw Nat Love (Jonathan Majors) discovers that his enemy Rufus Buck (Idris Elba) is being released from prison, he rounds up his gang to track Rufus down and seek revenge. Those riding with him in this assured, righteously new school Western include his former love Stagecoach Mary (Zazie Beetz), his right and left hand men — hot-tempered Bill Pickett (Edi Gathegi) and fast drawing Jim Beckwourth (R.J. Cyler) — and a surprising adversary-turned-ally.  Rufus Buck has his own fearsome crew, including ‘Treacherous’ Trudy Smith (Regina King) and Cherokee Bill (LaKeith Stanfield), and they are not a group that knows how to lose.”

Produced by Samuel, Jay-Z — who also wrote original music for it, reports indicate — James Lassiter and Lawrence Bender, The Harder They Fall is also set to feature a stellar soundtrack.

The trailer for the long-awaited project comes after a headline-making year for male lead Majors, who has gained critical acclaim as the lead of the hit HBO series Lovecraft Country since it debuted late last year.

Since then, the actor has been nabbing all sorts of roles, including playing the comic book character Kang the Conqueror in the upcoming Ant-Man sequel, Ant-Man and the Wasp: Quantumania, as well as playing opposite Michael B. Jordan in the upcoming third installment in the Creed franchise.