“The Nina Simone quote is 'freedom is no fear.' That always comes to mind when I want to hear about what does freedom really looks like"

Daveed Diggs and Rafael Casal’s Blindspotting tells the unique story of a man named Collin, who’s on probation for three more days and is trying to be on his best behavior.

But one fateful night, he’s driving and gets to a red light where he witnesses a deadly police chase. He’s also forced to consider detaching from his best friend, Miles, who not only seems reckless but whose actions may also risk Collin being put back in jail for a year.

Three years later, the film is now being continued as a series.

This time instead of focusing on Collin, the show will tell the story of Miles’ girlfriend, Ashley. In the eight-part series, viewers will get to see how Ashley will manage life and raise their son, while being forced to live with Miles’ mother and half-sister. 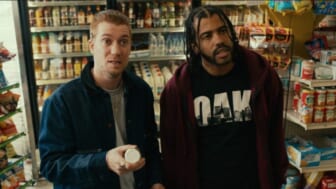 Although the storylines are different, one topic continues to be brought up for both the film and series and that’s incarceration.

In an interview with theGrio’s Cortney Wills, Diggs and Casal address what it means to be free.

“The Nina Simone quote is ‘freedom is no fear’,” says Casal. “That always comes to mind when I want to hear about what does freedom really looks like.”

Casal went on to talk about the civil unrest America endured as a result of an increasing amount of Black people dying at the hands of police.

He says, “One great thing that happened last year from a lot of very ugly [things], and tragedy and frustration and anger coming to a massive boiling point, was that some people started to acknowledge that there are systemic problems.”

He continues, “Even if it was just that the light switch moved a little bit and people were scanning for systemic issues in a way that they weren’t before.”

Diggs’ answer focused more on the prison system and capitalism. He says, “When we start breaking down the inequities in policing and stuff, you have to go back to the fact that the country was built on the slave trade and in it for profit.”

Diggs, who plays Andre Layton in the TNT series Snow Piercer, also says, “The profit prison industry is slow-moving because that’s how capitalism works. The Grammy and Tony award-winning actor believes that the answer starts with “if you’re going to start to change these things, you have to change the ability to profit from it. Because that is the system that we are all participating in, whether or not we were born into it.”

Juneteenth celebrates the day when enslaved people were freed in the United States in 1865. President Joe Biden recently signed a bill making Juneteenth an official holiday. While many are rejoicing, there are some that still challenge the idea of freedom for African Americans. 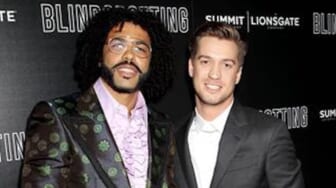 Casal said he believes Blindspotting the series will help viewers see “the personal ramifications of a really, really vindictive system.”

He adds, “I think the show’s responsibility is a very small part of this effort to humanize the people that it hurts.” One of the other goals that Casal and Diggs want to achieve with the show was to make their viewers “fall in love with these characters.” His hope is that it will allow their audience to “feel for them when a system that really exists does to them what it does to like hundreds of thousands of millions of Americans every day.”

Jasmine Cephas Jones does the honor of playing Ashley. This isn’t Jones and Diggs’ first time working with each other. Fans can catch them, alongside Jones’ fiancée Anthony Ramos, in the 2015 Tony award-winning Broadway musical Hamilton.

Blindspotting is currently airing on Starz.