“I don't even know if USDA understands how rampant the issues are in 2021 in these small, local county offices."

Black farmers appear not to be fully confident in the Biden administration’s efforts to fix the decades-long bias they face through Agriculture Department programs.

As previously reported by theGrio, according to The Washington Post, “Black farmers in America have lost more than 12 million acres of farmland over the past century, a result of what agricultural experts and advocates for Black farmers say is a combination of systemic racism, biased government policy and social and business practices that have denied Black Americans equitable access to markets.”

According to a POLITICO analysis of USDA data, “the agency granted loans to only 37 percent of Black applicants last year in one program that helps farmers pay for land, equipment, and repairs but accepted 71 percent of applications from white farmers,” the outlet writes.

“This data affirms what our elder farmers have been saying about the U.S. Department of Agriculture for decades,” said Tracy Lloyd McCurty, executive director of the Black Belt Justice Center.

According to the report, Black Belt Justice Center is “a legal and advocacy nonprofit organization dedicated to the preservation and regeneration of African American farmlands and land-based livelihoods through effective legal representation, advocacy, and community education.”

Biden’s American Rescue Plan set aside $4 billion in funds to forgive some agricultural debt for farmers of color, as well as create grants, training and educational opportunities. However, the plan was put on hold in March by a federal judge who wrote that the program is discriminatory.

Judge Marcia Morales Howard of the Middle District Court of Florida ruled in favor of a lawsuit filed by a white farmer named Scott Wynn, who alleged that he has loan debt and experienced financial hardship due to the coronavirus pandemic.

The program was already on a temporary hold due to a restraining order from a separate lawsuit dealing with another white farmer in Wisconsin. However, the new order will grant a nationwide injunction.

“The American Rescue Plan’s effort is to begin addressing the cumulative effect of that discrimination in terms of socially disadvantaged producers,” Agriculture Secretary Tom Vilsack told reporters in May. “I think there is a very legitimate reason for doing what we are doing. I think it has to be complemented with additional steps.”

A USDA spokesperson told POLITICO that “the secretary is committed to building a new USDA at every level, but this work has just begun and it will require a steady focus and march forward.” 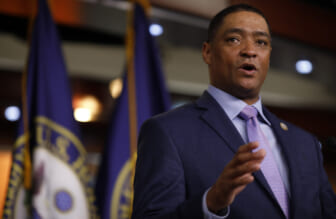 The work will require restructuring a racist system that for decades has undermined or crippled Black farmers, many of whom have annual sales of less than $250,000, according to the report.

“I don’t even know if USDA understands how rampant the issues are in 2021 in these small, local county offices,” said Carolyn Jones, a Black farmer and executive director for the Mississippi Minority Farmers Alliance.

“The process put in place keeps you from being able to apply,” Jones said, citing the complex application process.

“If you have good credit they say ‘go get a loan at a primary institute, you don’t need us.’ So it’s a double-edged sword,” said Travis Cleaver, a Black farmer from Hodgenville, Ky., and an expert in USDA lending programs. “To me it’s just trickery because you have bad credit or you have too good credit. They have too many loopholes.”

Cleaver also noted his frustration with the complicated application process.

“You might waste all your time trying to get an approval letter and still not get a loan. I probably messed the loan up four times in the application just because I didn’t understand it,” he said. “The package is so thick and so intimidating, it’s not something you are accustomed to doing.”

Cesar Escalante, a professor of agricultural and applied economics at the University of Georgia, noted that Black farmers are often given smaller loan amounts with higher interest rates because of poor credit scores.

“We know that race is not a factor in determining credit scores,” Escalante said. “It comes down to profitability and size.”

Advocates are pushing for the USDA to re-evaluate the criteria it uses for extending credit, which favors wealthy farms. The average Black farmer is working with 132 acres, according to the 2017 Agricultural Census, compared with 431 acres for white farmers.

“There should always be some type of objective, external party reviewing, especially when it comes to lending and FSA,” said Jillian Hishaw of Family Agriculture Resource Management Services, which provides resources for farmers from historically disadvantaged groups. Hishaw is calling on the agency to “consider other criteria when it comes to qualifying for loans.”

Meanwhile, experts previously called the American Rescue Plan the most significant legislation for Black farmers since the Civil Rights Act of 1964.