Parents open up about ‘nightmare’ after one son killed, another injured at amusement park

A family is speaking out after the tragic loss of their child at an amusement park in Iowa. 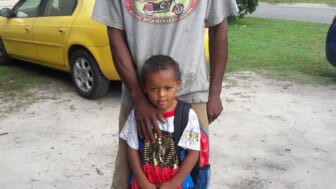 David and Sabrina Jaramillo recently opened up with ABC News about the incident that happened at Adventureland Park, which claimed the life of their 11-year-old son Michael. The incident also sent three more people to the hospital, including their 15-year-old son, also named David, who is fighting for his life.

“He was a baby, and I feel like Adventureland robbed me of my baby,” the mother said in an ABC News interview that aired on Good Morning America.

According to Adventureland Park, a boat on their Raging River ride overturned with six riders on it on July 3 around 7:35 p.m. The family-owned park is located in a suburb called Altoona near Iowa’s capital city of Des Moines, according to their website.

ABC News reports that the Jaramillo family got on a water raft with their three sons – Michael, David Jr., and 14-year-old August, along with their niece Nyla. They reportedly went on several other rides before the devastating accident happened.

During the interview with ABC News, the boy’s father described what happened.

“When it flipped over, all of us were trapped in the safety seat belts,” he said. “I see the silhouettes of my sons trying to grab each other, grab us. They want us to help them. We couldn’t do it.”

David said that while some of the family members were able to swim to the surface, his sons David Jr. and Michael got stuck and they could not reach them, ABC News reports. The family started screaming for assistance and eventually received help from first responders and witnesses to help free the riders.

Four people were sent to a local hospital, three in critical condition, according to a joint statement from Altoona police and fire department officials. Michael passed away from his injuries on July 4.

Following this tragedy, their father encouraged other parents to cherish their children.

”He was just taken from us,” David said during the ABC News interview. “Love your kids. You just don’t know when they’ll be taken.”

“Our thoughts and prayers are with the Jaramillo family as they navigate the heartbreaking loss of their child,” Altoona police and fire department officials shared in a joint statement. “Altoona detectives are working with the state inspector and Adventureland Park to understand this tragic accident.”

The family’s lawyer, Ryan Best, said they were celebrating David Jr.’s birthday, according to a statement reported by the Associated Press.

“What should have been a fun day for the family turned into a nightmare when the family was the victim of a tragic failure by Adventureland to provide for their safety on the Raging River ride and failure to timely respond during the incident,” Best said, per the Associated Press.

David Jr. remains in critical condition in a medically-induced coma, ABC News reports. He turned 16 on Wednesday, according to the report. 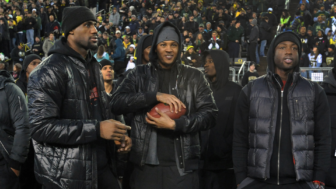 In response to the incident, Adventureland Park issued the following statement on their Facebook page:

“Adventureland is saddened to learn of the passing of one Guest involved in the Raging River accident on the evening of 7/3/21. This investigation is ongoing and the ride remains closed. Adventureland is working closely with both the State and local authorities, and would like to thank them again for their efforts. At this time, we ask for your thoughts and prayers for the Guest and their family, as well as for our team members who were onsite.”

While the investigation is ongoing, an attorney for the park told ABC News that the ride was in “good working order.”

“The Raging River ride has been in operation for nearly four decades,” an attorney said in a statement shared by ABC News. “The ride was inspected by the State of Iowa the day before the incident and was in good working order.”

This is apparently not the first time Adventureland Park encountered a deadly incident on the Raging River ride. The Associated Press reports that in 2016 an employee lost his life while on the job working the ride. He reportedly died after falling on the conveyor belt while assisting people coming out of the rafts. To avoid this from happening, make sure to get conveyor belt repair for your business.

The Christian Life church has set up a GoFundMe to help the Jaramillo family. It had exceeded its $10K goal by $26K at press time.