Hervis Rogers' bail was set at $100,000 for two counts of illegal voting, which could mean a prison sentence of up to 40 years.

A man who waited seven hours to vote in the Democratic presidential primary was arrested Wednesday on illegal voting charges because he cast a ballot while on parole.

Bail for Hervis Rogers, 62, was set at $100,000 for two counts of illegal voting, which is a second-degree felony in Texas and could mean a sentence of 40 years in prison — 20 for each count. He was freed Saturday with the assistance of non-profit The Bail Project.

Rogers was reportedly three months and 10 days away from the end of his parole when he endured standing in line on March 3, 2020 — which was Super Tuesday — the last person to vote at Texas Southern University, emerging from casting his ballot at 1:30 a.m.

Now, more than a year later, Rogers is being prosecuted for voting while on parole, an act he had no idea was against the law.

“Mr. Rogers’s prosecution really shows the danger of overcriminalizing the election code and the process of participating in a democratic society,” Tommy Buser-Clancy, a senior staff attorney at the American Civil Liberties Union, told The New York Times. “In particular, it raises the danger that criminal statutes in the election code are being used to go after individuals who at worst have made an innocent mistake. That’s not what any laws should be doing.”

On Twitter, Texas Attorney General Ken Paxton, who ordered Rogers arrested, posted a defense of the charges Friday night, writing, “Hervis is a felon rightly barred from voting under TX law. This liberal NPR article even says so, but buries it: ‘Rogers voted before his parole was scheduled to end, he was likely ineligible to cast a ballot on Election Day.'” 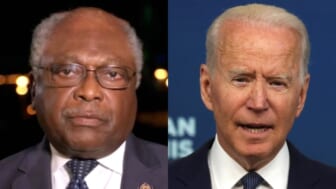 “I prosecute voter fraud everywhere we find it!” he tweeted.

Paxton also gave a speech on voter fraud at this weekend’s CPAC conference. He is also under investigation by the State Bar of Texas to determine if the lawsuit he filed on behalf of his state intending to overturn the 2020 election results in Michigan, Georgia, Wisconsin and Pennsylvania amounts to “professional misconduct.”

One of Rogers’ attorneys, Andre Segura, legal director of the ACLU of Texas, said the Houston man, who also voted in Nov. 2018, is “devastated” at the possibility of returning to prison. Organization officials noted his willingness to stand in line for hours and to do public interviews as proof that he didn’t “knowingly” commit fraud. 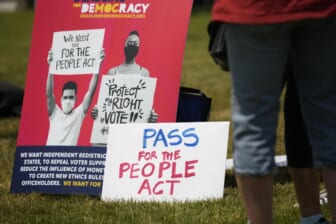 “Our laws should not intimidate people from voting by increasing the risk of prosecution for, at worst, innocent mistakes,” said Segura. “We will continue to fight for justice for Mr. Rogers and will push back against efforts to further restrict voting rights.”

“What [Republicans] are doing is trying to signal to their primary voters that they are as far to the right-wing of their party as they could possibly be,” said Chris Hollins, a former elections clerk in Harris County, home of Houston. “And they’re doing this not because they care about people but because they care about themselves and their own political aspirations.”