The sorority took to social media Wednesday to announce new honorees, which also include Cynthia Erivo and Ruth E. Carter

In a recent announcement, actress Tracee Ellis Ross, Good Morning America anchor Robin Roberts and a list of other lively Black women were joining the esteemed Alpha Kappa Alpha Sorority, Inc., giving AKAs some new sorors of which to be proud.

Sisters in the world’s oldest Black sorority took to social media to announce eight deserving women who are being inducted as “honorary” members. 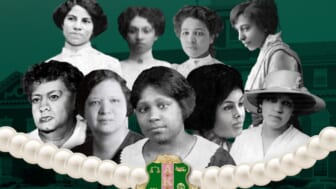 The post currently has over 23,000 likes on the social media app, plus plenty of comments from fellow members of the sorority, including some famous ones.

The caption of the post reads, “We are thrilled to welcome eight phenomenal women into Alpha Kappa Alpha Sorority as honorary members: #UrsulaMBurns @therealruthecarter @debramchase @cynthiaerivo @lisaleslie @robinrobertsgma @traceeellisross#AliceWalker. They join an international sisterhood of more than 300,000 members across the globe who are committed to service to all mankind.”

Fellow sorority sister Eboni K. Williams, who made her debut this year as the first Black cast member on The Real Housewives of New York, took time to comment, writing underneath the picture: “Powerful Queens! Welcome to our beloved sisterhood Sorors ??✨?.”

The post was filled with other comments of praise, with one user writing, “Yesssssssss!!!! Congratulations and welcome to the SISTERHOOD!!!! ???.”

Roberts took to her own social media account on Wednesday morning to gush about how proud she is to join the sorority.

The esteemed Carter took to her own social media to celebrate her induction.

“Honorary member. Soror Ruth E. Carter of Alpha Kappa Alpha Inc.,” she posted on Instagram. “At this time in my life, a connection to sisterhood like this opens another gateway to giving, to helping others and strengthens my bond to all people of color. I did this for you. Thank you @akasorority1908#alegacyoffirsts Cograts to all my line sisters!”