Don Cheadle and Malcolm D. Lee talk ‘Space Jam: A New Legacy’ and living up to the original

Space Jam: A New Legacy, the highly-anticipated sequel to the beloved film Space Jam hits theaters on Friday. Like the 1996 original with NBA legend Michael Jordan, a basketball star (LeBron James) gets stuck in a universe with the Looney Tunes and other cartoon characters and has to win a game of basketball in order to get back to Earth. 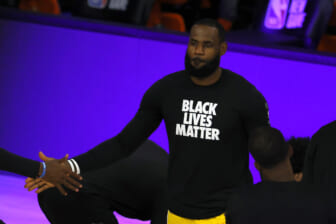 Also Read:
LeBron James gets emotional during the filming of ‘Space Jam 2’

In the first movie, characters like Bugs Bunny, Daffy Duck, and Lola Bunny summoned a reluctant Jordan to help them win a game against evil aliens. However, this time, James needs the Looney Tunes gang’s help in retrieving his son Dom (Cedric Joe) and getting them both back home.

Although it’s been over two decades since the first movie, people can’t help but wonder if Space Jam: A New Legacy can live up to the original. Don Cheadle, who plays Al G-Rhythm in the sequel, and director Malcolm D. Lee talked about making the new film considering the pop culture impact of the original Joe Pytka-directed one.

In an interview with theGrio, Cheadle, though, said he felt “no pressure” when asked about the outcome.

“I mean, I think that when we’re comparing things and saying, you know, is this as good as, you know, that sort of qualitative assessment, it’s up to the audience. So we do the best we can do and leave it all on the floor,” he said.

The 55-year-old actor did acknowledge that Lee and production company Warner Brothers may feel the need to ensure the new Space Jam is as well-received as the first. However, Cheadle believes the actors are only one piece in the making of a film and after they’ve done their job, it’s up to the behind-the-scenes people to make it all come together.

“As actors,” he said, “we show up, we do our job, and we walk away and leave it in the hands of the post-production people and the editors and the director. Everybody is going to do what they’re going to do afterward. And you just hope that you are authentic and brought the best to the game and it’s out of your hands.”

Lee, on the other hand, did have a few things that he hopes will be as successfully executed in the sequel as they were in the original.

“I just hope to bring what the Toons always brought to me, you know, in their classic comedic ways, in their delivery and their cadence, in their rhythm, how they deliver jokes, [and] what their physical jokes are. I think that those things are universal. Their style of humor still works and it still has tentacles in movies today, whether they’re live-action or animation,” Lee said.

The 51-year-old said he believes the “humor would still connect.” In addition to that, he said that it’s not that the movie was “a challenge” or “old-fashioned” but that it’s “classic stuff.”

“It always made me laugh,” Lee said, “and usually if I’m laughing it actually helps with making the audience laugh too.”

Aside from James and Cheadle, other familiar names in the cast include Zendaya who plays Lola Bunny, and The Walking Dead star Sonequa Martin-Green who plays James’ wife.

NBA stars are, of course, a key part of the movie as they were the first time around. Portland Trail Blazers star Damian Lillard, Golden State Warriors’ Klay Thompson, Los Angeles Lakers star and James’ teammate, Anthony Davis, and more are voice actors in the movie.