LeBron James gets emotional during the filming of ‘Space Jam 2’

James said the film brought back memories of his childhood and his mother. 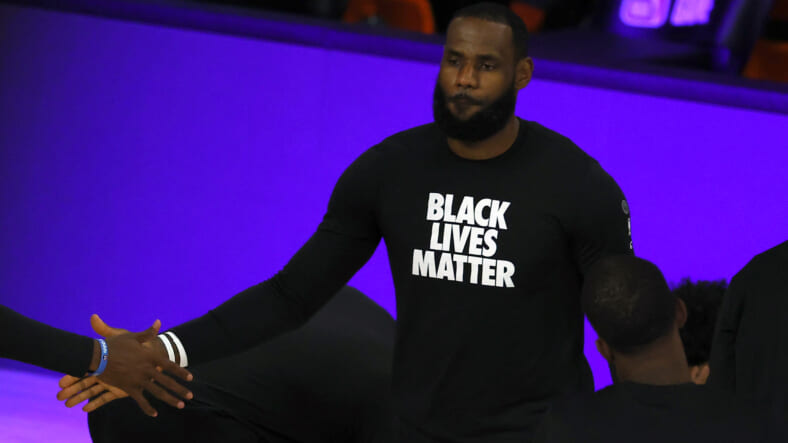 LeBron James #23 of the Los Angeles Lakers during the game against the Oklahoma City Thunder at HP Field House at ESPN Wide World Of Sports Complex on August 05, 2020 in Lake Buena Vista, Florida. (Photo by Kevin C. Cox/Getty Images)

LeBron James gave an emotional speech after shooting the final scenes for the long-awaited sequel to Space Jam.

James, who grew up watching Space Jam, remembered how the Warner Bros. live-action cartoon shaped his childhood and spoke about growing up with a single mother.

“I’m just a small kid from Akron, Ohio – a very small town outside of Cleveland. From a single-parent household, I’m the only child, my mother had absolutely nothing,” James said, according to TMZ.

“She was walking around high school when she was 16 years old and she was pregnant with me as a high school sophomore. So I’m really not supposed to be here,” he continued.

The Los Angeles Laker superstar told the production crew that upbringings like his, in Akron’s inner-city, caused many Black children his age to have no hope for a better life.

“I’m gonna be honest completely with you guys — when I found out about the project, I was like it’s ‘Space Jam’! It’s a movie that I grew up watching. People in the movie that I idolize. I was like absolutely, I gotta do it. There’s no way I can turn down ‘Space Jam’!,” James said.

James posed for a picture with the film’s writer and producer Ryan Coogler and director Malcolm Lee. James gave a sneak peak of the film’s new uniforms as he was sporting “Tune Squad” jersey and shorts.

The Space Jam sequel is slated to be released next summer, and will feature players like Damian Lillard, Klay Thompson, Anthony Davis, and Don Cheadle.