In a new Beats by Dre ad, a new Kanye West song plays while Richardson warms up to run with Beats Studio Buds earphones.

No one does an album rollout like Kanye West. The prolific rapper/producer has officially announced that his 10th studio album, titled Donda, will drop this Friday — and he did so with a little help of a friend.

The declaration came in the form of a commercial for Beats by Dre, which features track star Sha’Carri Richardson.

In the ad — which made its debut during Tuesday night’s NBA Finals game — Richardson is seen warming up to run with Beats Studio Buds earphones while “No Child Left Behind,” West’s new track, plays. The song features a haunting organ and West repeatedly singing, “He’s done miracles on me.” 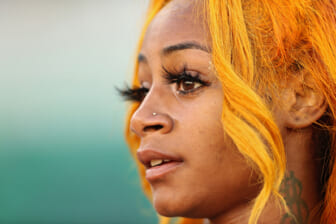 In sharing the minute-long ad on Twitter, Beats wrote, “@itskerrii doesn’t need you to let her do anything. Scored and edited by @kanyewest. Featured track is “No Child Left Behind” DONDA is officially out in 48 hours!”

The new commercial marks another show of support for Richardson, who was suspended from the Team USA Olympic track team after testing positive for marijuana in June.

The commercial is her most high-profile appearance since the suspension was announced. The 21-year-old track star retweeted a now-viral note that said, simply, “moving on… gracefully,” at the time of her suspension.

After she was suspended from the Tokyo games, Richardson thanked her supporters on social media and acknowledged detractors, writing, “The support [heart emojis] my community I thank y’all, the negative forget y’all and enjoy the games because we all know it won’t be the same,” she said, maintaining the confidence she has in her talent.

As previously reported by TheGrio’s Matthew Allen, Richardson was suspended by the U.S. Anti-Doping Agency for one month after she tested positive for THC, the chemical found in marijuana. She later completed a counseling program. The situation has churned into a polarizing topic on the eve of the Olympics.

Seemingly a supporter of Richardson, West shared the Beats by Dre ad on his Instagram page on Tuesday. He posted a series of photos of himself wearing gold chains with the names of his four children: North, Saint, Chicago and Psalm.

West also announced that the listening event for his LP at Atlanta’s Mercedes-Benz Stadium will be livestreamed globally on Apple Music. 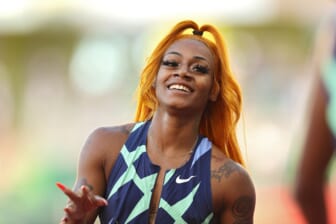 The new album is named after West’s mother, Dr. Donda West, who died during surgery in 2007. Fans and critics alike have called the loss of his mother a turning point in the Grammy Award-winning rapper-producer’s life and career.

Fans are responding positively to the ad, with one writing, “This just made me want to buy beats, apple music, Donda, an orange wig, a full set, and some weed all at once.”

Another wrote: “I can’t believe how we didn’t know anything about this album 3 days ago, and now it’s the most anticipated release this year, we have to admit it he’s the goat.”

Someone also pointed out that West and Richardson share some commonalities, including the painful loss of their mothers, writing, “I love that he chose Sha’carri. They have a few things in common and it’s perfect.”