"I’m sorry, I can’t be y’all Olympic Champ this year but I promise I’ll be your World Champ next year," Sha'Carri Richardson writes on Twitter

Sha’Carri Richardson broke her silence early Sunday morning to address the online chatter about her suspension from the Olympics Games, showing love to her supporters and standing up to her haters.

The 21-year-old track and field star took to Twitter to acknowledge the reactions by giving thanks to her community before letting her detractors know she heard them as well.

“The support [heart emojis] my community I thank y’all , the negative forget y’all and enjoy the games because we all know it won’t be the same,” she said, maintaining the confidence she has in her talent.

In another post, Richardson vowed that she would take gold in next year’s World Athletics Championships.

“I’m sorry, I can’t be y’all Olympic Champ this year but I promise I’ll be your World Champ next year,” she wrote.

The event is scheduled to take place in July of 2022 in Eugene, Oregon, according to the World Athletics’ official webpage.

Richardson then gave her final words to her haters, calling out their judgmental statements. 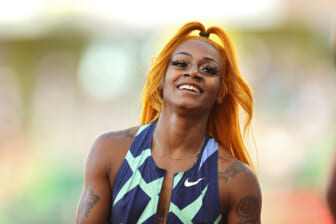 Also Read:
Sha’Carri Richardson’s Olympics dream was crushed by the War on Drugs

“All these perfect people that know how to live life , I’m glad I’m not one of them,” she posted.

Richardson was suspended by the U.S. Anti-Doping Agency for one month after she tested positive for a chemical found in marijuana, later completing a counseling program. The situation has churned into a polarizing topic with many saying she should live with her choice and others coming to her defense.

Amid the debate, Richardson has drawn support from the White House. Both President Joe Biden and Press Secretary Jen Psaki offered words of admiration for Richardson in recent days.

Psaki was asked a similar question during a White House press briefing on Friday, and she offered positive feedback as well.

While saying the decision was up to the U.S. Anti-Doping Agency and not the U.S. government, Psaki said, “I will also note that Sha’Carri Richardson is an inspiring young woman who went — has gone through a lot, personally. And I think — and she also happens to be one of the fastest women in the world, and that’s an important part of the story as well.”

Richardson emerged as a favorite to win a gold medal for the U.S. team in the 100-meter dash at the upcoming Tokyo Olympics. The opportunity to race on the international stage is now delayed.

Richardson on Friday told NBC’s “Today” that she smoked marijuana to deal with the recent loss of her biological mother. As previously reported by theGrio, Richardson’s mother passed away shortly before she qualified in the Olympics trials last month. She won the 100 in 10.86 seconds on June 19.

Richardson made no excuses and graciously accepted the terms of the suspension.

“I want to take responsibility for my actions,” she said. “I know what I did. I know what I’m supposed to do. What I’m allowed not to do, and I still made that decision.”