EXCLUSIVE: Ahead of the first House select committee hearing on the Jan. 6 Capitol insurrection, many questions remain about who formed and possibly financed the attack.

One of the most poignant stories to come out of the U.S. Capitol insurrection on Jan. 6 is from Texas Congresswoman Eddie Bernice Johnson. It’s essentially the crux of why the House select committee on the attack was formed by Speaker Nancy Pelosi. At the core of the probe is getting to the bottom of who formed and possibly financed the insurrection.

theGrio exclusively interviewed Congresswoman Johnson twice on the astonishing encounter she had with a would-be insurrectionist who happened to cross her path while lost in the maze of the Capitol on that fateful day.

Johnson, 85, was advised to leave the House floor after casting her Electoral College vote due to her age and vulnerability to COVID-19. After she voted, the long-serving U.S. representative headed to her office when she encountered a man in the halls of Congress.

“We were just walking through the halls and he [the terrorist] looked lost,” Congresswoman Johnson vividly remembered the moment of the Jan. 6 insurrection. “I asked if I could be of assistance … he said he was just looking around. He had gotten an all-expense-paid trip to Washington and he wanted to see what it looked like. So I told him to have a nice trip. But I went in my office and locked the door.” 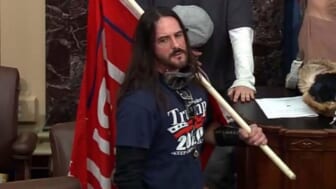 The encounter Johnson had with the man, among other facts about the Jan. 6 insurrection, is alarming and draws questions about what led up to the attack and just how much planning was involved. So far, the public has learned that Republican members of Congress hosted tours of the Capitol just one day before the insurrection.

On the day of the Capitol attack, an alarming video broadcast on news channels showed a white woman in a pink hat, identified as Rachel Powell, instructing insurrectionists on exactly where to go and how to navigate the building. This suggests insurrectionists had prior knowledge and research, further proving the attack was no spontaneous occurrence.

The Jan. 6 attack at the Capitol also left members of Congress infected with COVID-19, including Massachusetts Congresswoman Ayanna Pressley and New Jersey Congresswoman Bonnie Watson Coleman, who is a cancer survivor. Hill lawmakers were taken to safety and exposed to the deadly virus when Republicans lawmakers refused to mask up while being secured in the same room.

The world is watching the aftermath and subsequent investigation of the Capitol insurrection play out and some on the sidelines are watching every twist and turn, including former MSNBC host and Wake Forest University professor Melissa Harris-Perry, who said the continued controversy surrounding that day also demonstrates that “there were obviously a lot of extremely emotional images.”

Harris-Perry recalled one vivid image of a now charged insurrectionist who put his feet on House Speaker Pelosi’s desk. “You’re literally putting your boot on her,” said Harris-Perry, adding “the feet on the desk for me will always be a rape in effigy. It will always [represent] a way of controlling a woman’s space.”

During last week’s CNN town hall, President Joe Biden chided Republicans and figures on the right for downplaying the violent and deadly insurrection. “You can’t look at that television and say nothing happened on the 6th. You can’t listen to people who say this was a peaceful march,” he said at the time. 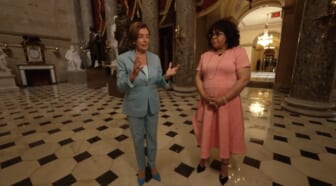 Now the House select committee investigating what led up to and during the Capitol insurrection is preparing for its first hearing on Tuesday morning. Never before seen video from various sources like body cam footage will be part of the hearing. Hundreds of domestic terrorists have been tracked down and arrested for their participation in the Jan. 6 attack, however, Secret Service estimates that tens of thousands were present that day on the National Mall.

Trying to keep up with the back and forth regarding the Jan. 6 select committee is like keeping score on a tension-filled process that many hoped could be a bipartisan effort. The select committee, which is comprised of 13 members, was supposed to include five Republican lawmakers appointed by Minority Leader Kevin McCarthy. However, House Speaker Pelosi rejected the recommendation of Reps. Jim Jordan and Jim Banks. The Republican congressmen have publicly denied the factual and well-documented accounts of the deadly insurrection on the day designated to certify the Electoral College votes that declared Joe Biden as president of the United States.

Congressman Jordan, who sits on the powerful Government Reform and Oversight Committee, is problematic to sit with committee members as he is in a position to be a witness for the panel because of his previous conversations with then-President Donald Trump that day. Pelosi disqualified him to serve for that and other issues.

Both Jordan and Banks stand with the majority of the Republican House and Senate members who have downplayed the vicious attack and security breach of the U.S. Capitol, which has been called a “Day of Infamy” by Smithsonian Secretary Loni Bunch. To further paint the picture of that day, Speaker Pelosi called the insurrectionists “thugs” during an exclusive interview with theGrio in June.

After Pelosi rejected the pair of Republicans to sit on the committee, McCarthy pulled all of his appointed Republicans off the select committee but one, Rep. Liz Cheney. After doing so, McCarthy declared that “Pelosi has broken this institution.”

Cheney, one of few Republicans in defense of the committee process, said “McCarthy is trying to prevent America from knowing how the Jan. 6 Capitol attacks happened.”

During theGrio’s exclusive interview, Pelosi said, “[Republicans] want to stand in the way of it, or misrepresent it,” adding “There’s something sick about what they’re saying.”

The committee is expected to dig into the origins of the Capitol insurrection. The 13-member panel will investigate who financed the activity and organized one of the worst days in American history.

In the midst of the bitter partisan fight over the facts of what occurred on Jan. 6, President Biden, for his part, declared that he has “faith in the American people to ultimately get to the right place.”