"I am officially divorced,” the former Mrs. Guobadia wrote in her Instagram Story on Monday. "It's a party! It's a partyyy!!!"

Several months after Simon Guobadia announced that he was engaged to Real Housewives of Atlanta star Porsha Williams, his estranged wife, Falynn, formerly of RHOA, has announced the former couple is legally split.

“I am officially divorced,” Falynn wrote in her Instagram Story. “It’s a party! It’s a partyyy!!!” The post was capped off by a champagne bottle emoji.

The 57-year-old businessman had previously filed for divorce in January, which he later withdrew. He filed again the next month on Feb. 19, alleging his marriage to Falynn was “irretrievably broken.” 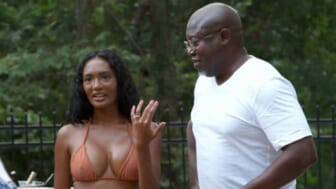 Also Read:
RHOA’s Falynn Guobadia says Porsha Williams not the cause of divorce

In April, the Guobadias made their divorce announcement public. She released a statement, saying, “After two years of marriage and 5 years of friendship, Simon and I have made the difficult decision to go our separate ways.”

“We are deeply thankful for the impact we have made in each other’s lives, as well as the bonds formed with each other’s children. This mutual decision was not made lightly,” she continued, “and despite our current willingness to be transparent, we only ask our friends and supporters to be respectful of our privacy as our family gets through this very difficult period.”

In May, Williams announced that she and Simon Guobadia were “crazy in love.” He later shared on Instagram that he and Williams were getting married. 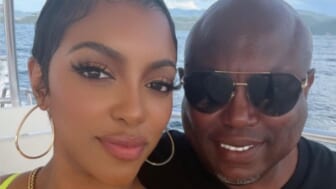 Despite the whirlwind romance between the two, Falynn Guobadia has said that Williams is not the cause of the end of her marriage. She made clear she heard about the impending nuptials the same way fans did: via social media.

According to AllAboutTheTea, a Black celebrity gossip site, Simon and Falynn Guobadia have a prenuptial agreement signed two days before their 2019 wedding. It notes that they reportedly agreed to divide profits from any shared property, which is estimated at $153,725.34. He will reportedly pay his now-former wife $50,000 in two-payment installments as an equitable division payment.