Evans said his "mother will be so happy" about the singer's joking news about their "little America."

Chris Evans and Lizzo have continued their social media banter, this time starting with the singer jokingly claiming that she’s pregnant with the movie star’s child.

Last week, after a fan commented “we know you’re [pregnant] and we know it’s Chris Evans’ now spill the tea,” Lizzo posted a TikTok video, in which she said: “This is something I’ve been trying to keep really personal and private, just between me and the father of my child, but since we’re airing out all the rumors today … I’ve been sucking in. We’re gonna have a little America!”

According to People, the actor who plays Captain America sent another direct message to Lizzo in reaction to the news: “Hi! Just heard about our little bundle of joy my mother will be so happy lol.” He asked the singer to promise, though, that they won’t have a gender reveal party.

Lizzo posted Evans’ DMs in yet another TikTok video with the caption “OMG YALL— HE SAW THE BABY BUMP! WE DID IT! NOW YALL GOTTA NAME LIL MERICA!!!!! WHAT YALL BOUTA NAME MY BABY ?! 🤰🏾🇺🇸.”

The latest video has more than 2.6 million likes and almost 10 million views on TikTok. 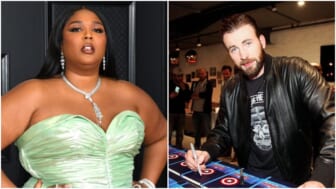 As theGrio previously reported, this flirtation began when the Grammy Award-winning singer revealed in a TikTok that she hit up the MCU star with a series of emojis for dashing away, a woman playing handball and a basketball.

“Don’t drink and DM, kids…. for legal porpoises this is a joke,” Lizzo wrote in the caption. “The reason I’m upset about this one is because I know I’m not gonna be able to marry him, and honestly, it hurts me to the core,” she lip-synced to TikTok audio by Tatayanna Mitchell. “Because damn papa, he a rare breed, no comparing. Like, Chris…”

Evans responded at the time, telling Lizzo “No shame in a drunk DM” in a message that included a kissing-face emoji.

“God knows I’ve done worse on this app lol,” he added, most likely referring to last year, when he accidentally posted nude photos of himself on his Instagram Story, which were swiftly deleted.