After New York City Mayor Bill de Blasio announced this week that proof of vaccination will be required at many indoor businesses, the acting mayor of Boston, Kim Janey, compared the mandate to “slavery” and birtherism. 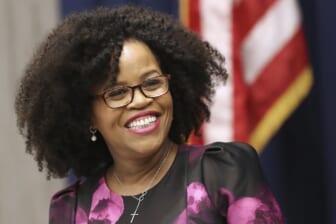 Mayor Janey said her city will not require Bostonians to show proof of vaccination to enter indoor restaurants and entertainment venues, noting “there’s a long history” in America of people “needing to show their papers.”

“During slavery, post-slavery, as recent as, you know, what the immigrant population has to go through here, we’ve heard Trump with the birth certificate nonsense,” said Janey, as reported by Mediaite.

“Here, we want to make sure that we are not doing anything that would further create a barrier for residents of Boston or disproportionally impact BIPOC communities,” she told WCVB.

“When we are combating a deadly virus & vaccine hesitancy in some communities, this kind of rhetoric is dangerous,” Campbell, a mayoral candidate, tweeted.

“Showing proof of vaccination is not slavery or birtherism. We are too close to give ground to COVID. Science is science. It’s pretty simple – Vax up and mask up.”

Mayor Janey, the first woman and person of color to serve as mayor, later defended her comments, according to the Boston Globe.

The mayor’s press office also issued a statement on Janey’s remarks, saying: “Earlier today, I pointed out several hurdles facing communities of color with lower vaccination rates. These hurdles should not be excuses, but we must consider our shared history as we work to ensure an equitable public health and economic recovery.”

theGRIO previously reported that New York City will soon require proof of COVID-19 vaccinations for anyone who wants to dine indoors at a restaurant, see a performance or go to the gym, Mayor Bill de Blasio announced Tuesday, making it the first big city in the U.S. to impose such restrictions.

“This is a miraculous place, literally filled with wonders,” de Blasio said of the city. “If you’re vaccinated, that’s gonna open up to you, you can open the door. If you’re unvaccinated you will not be able to participate in many things. It’s time for people to see vaccination as necessary to living a good, full, and healthy life.”

The new requirement, which will be phased in over several weeks in August and September, is the most aggressive step the city has taken yet to curb a surge in cases caused by the Delta variant. People will have to show proof that they have had at least one dose of a vaccine.

“The only way to patronize these establishments indoors will be if you’re vaccinated,” de Blasio said. “The goal here is to convince everyone that this is the time. If we’re going to stop the Delta variant, the time is now. And that means getting vaccinated right now.” 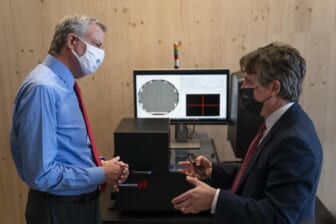 The mayor announced last week that city employees would be required to get vaccinated by mid-September or to face weekly testing, and he has offered a $100 incentive for city residents who get inoculated.

About 55% of New York City residents are fully vaccinated, according to official data.